Today, Verizon and Motorola revealed three new Droids, but there was also an elephant in the room. The Moto X, Google's new flagship handset, had already been pegged to come with several of the same intriguing features that Verizon announced for its heavily branded and subsidized smartphones. While we're not sure yet how the Moto X might distinguish itself from the company's other new products, at least we now know what to expect: a collection of leaked screenshots at AndroidPolice suggest that Motorola will preload a host of apps that try to make using the phone easier. 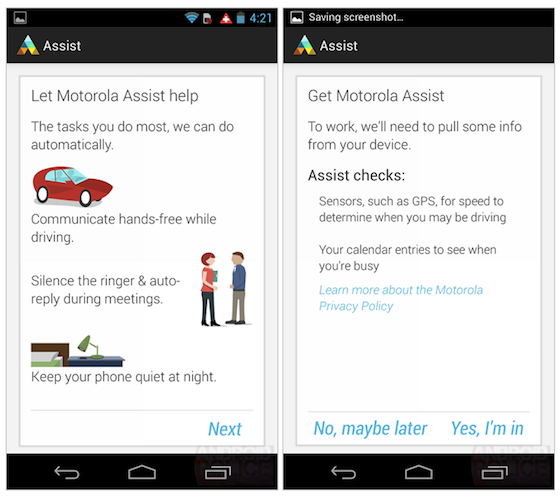 Motorola Assist: Motorola CEO Dennis Woodside talked up the intelligence of the Moto X at the D11 conference, saying "we know when it's in your pocket, we know when it's in your hand." Hopefully he wasn't just talking about Motorola Assist, which appears to be a prettied-up version of the company's previous Smart Actions app. That software changes your phone's settings in response to triggers like whether you're at home or work, or the time of day, and though some of Motorola Assist's font choices look suspiciously like Google Now, there's no evidence that there's anything more to it here.

Active Display: It appears that all of Motorola's new phones will use AMOLED screens to great effect, taking advantage of the ability to selectively turn individual pixels on and off to display notifications on the screen itself without waking up the entire phone. Announced today for the new Droids, it appears to be coming to the Moto X as well. 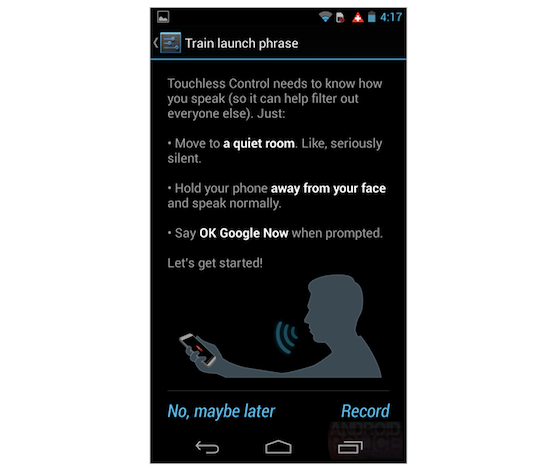 Touchless Control: As revealed in today's Droid announcements and as previously rumored, Motorola's new smartphones will always be listening for voice commands. Here, you can see the screen where you train the phone to recognize your voice by saying "OK Google Now" to it.

Motorola Connect: Another Droid feature, Motorola Connect is a Chrome browser extension that will send text messages and call notifications from phone to PC.

Motorola Migrate: Migrate could be a Moto X exclusive feature, or perhaps Verizon just didn't make a big deal of it at the Droid announcement. It migrates information, including slightly more difficult items like text messages and contacts on a SIM card, from one phone to the next.

Motorola Device ID: Possibly a Moto X exclusive, a feature Android users have been clamoring for: what appears to be a way to track a lost phone. According to a screenshot, Moto X owners will have access to a "Lost Phone Web Portal." [Update: As some have pointed out, a similar feature has been part of Motorola's Motoblur software for a while now.]

Last but not least, according to AndroidPolice, this is what the Moto X looks like when it boots up: