Loom: a better Photo Stream for iPhone and Mac

An 'infinite camera roll' to hold every photo you've ever taken

Share All sharing options for: Loom: a better Photo Stream for iPhone and Mac

For Jan Senderek, every week used to end the same way: a grueling 10-step process for importing the week’s photos to his computer and syncing them to his iPhone and iPad for browsing. "I would take my DSLR, compact camera, and iPhone, then connect them to my computer, sync everything up, manually delete photos from my Camera Roll, create albums on my computer, and then if I still had space would sync them through iTunes to my iPad," says Senderek. "I wanted to have all my photos on every device, but also to have the ability to manage photos from every device."

The routine nearly drove him crazy. When Steve Jobs announced Photo Stream in 2011, a new way to seamlessly sync recent photos between Apple devices, Senderek thought his plight had come to an end — but alas, Photo Stream is limited to syncing only your most recent 1,000 photos. After a year working on mobile photo sharing apps Eeve and Popset, Senderek and co-founders Daniel Wagner, Philipp Wein, and Matthias Link were ready for the next challenge: building the "infinite camera roll" he had always wanted, an app that backs up the photos on all your devices and makes them accessible from anywhere. It’s called Loom, and it's launching today on Mac and iOS.

The first step to building a photo library in the cloud, says Senderek, Loom's CEO, was defining a singular purpose that’s easy to understand. Google+ works well for hosting images, but people don’t want to upload all their private photos to a social network where it’s easy to accidentally share things, he says. Dropbox, another option for photo storage, is an excellent product, but it was built for storing documents, not photos, and is sluggish for browsing on mobile. Loom has one goal: to replace Apple's official Photos app. 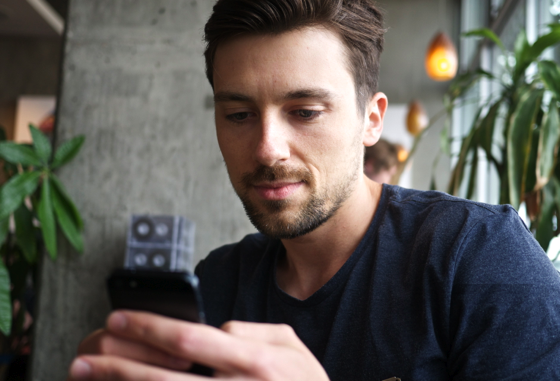 The second half of the equation is a daunting technology problem. "We are trying to do what Dropbox did in five years but in one year," he says, "except it’s actually a step further." Whereas Dropbox spent years perfecting its desktop syncing engine, and only later moved to mobile, Loom from day one syncs files to and from desktop and mobile, and even generates various sizes and thumbnails for each photo to serve to your various device. All of this processing takes place behind the curtains. Up front is an elegant, orange-hued Photos app that feels light as a feather.

Upon downloading Loom to your Mac, iPhone, and iPad, you’re given the option to choose a few folders to upload to the cloud. The Mac app is mostly for uploading new photos, but can also be set to download all new photos taken on your iPhone. The iOS app is a full-blown Photos app, as Senderek promised, letting you view all the photos in your Camera Roll, as well as from your Mac and iPad. In grand total, any photo you take on any device is available anywhere. Loom starts each user with 5GB, but offers a couple options for upgrading your storage: 50GB for $39.99 per year (or $3.99 per month), and 250GB for $99.99 per year (or $9.99 per month). Both options are cheaper than Dropbox. 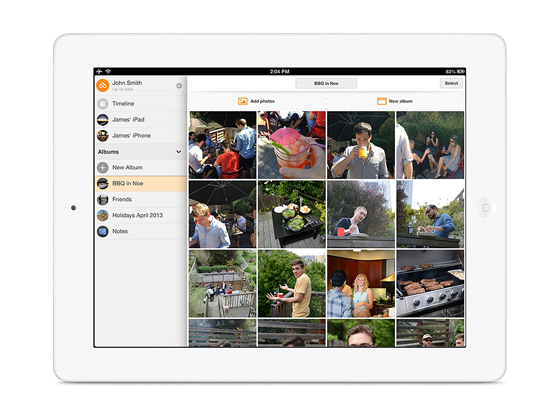 When you first open the iOS app, it asks to upload all the photos in your Camera Roll. It takes a few hours, but can be set to "Nonstop Upload" overnight which prevents screen lock and keeps the photos flowing. Once all your photos have been uploaded, Loom actually serves them back to you in a smaller, compressed format for viewing on your iPhone or iPad. Any time you open Loom, it checks for new photos in your camera roll and uploads them.

The app doesn’t yet let you download folders or albums for "offline mode" — but it pays attention to which photos and albums you access most (like your recent shots), and keeps those photos cached on your device. If you clear out your camera roll after uploading is complete and rely on Loom for viewing photos, your storage savings can be as high as 95 percent, Senderek says. In other words, if your iPhone’s camera roll is eating up 10GB, switching to Loom can earn you back 9,500MB of free space on your device, even if you’ve cached every photo.

Any photos you upload from your Mac also get downsized for viewing on mobile devices. "The only time you’d ever need the original is for printing or for editing in Photoshop," says Senderek, so there’s no reason to push enormous photos to your phone like Dropbox’s mobile app does. Of course, you have the option to download originals if you’d like. Loom’s compression ends up being one of the service’s killer features. It truly takes your Camera Roll to the cloud and saving space in the process.

It’s also possible to view every photo you’ve uploaded using a web interface at Loom.com. It’s quite similar to Dropbox’s new Photos tab — there’s a list of albums you’ve created, a timeline of every photo you’ve uploaded, and the ability to drill down by date to find photos you’re looking for. The only way to share photos, for now, is to select several photos, then share them with a URL, but that’s the point. Loom doesn’t want to be a social network with built-in friend feeds of shared photos. It only wants to be your photo library, which Senderek hopes could earn it some good will from users.

Using Loom is generally a great experience, but the service needs a few features before it can replace your Photos app. Most importantly, Loom doesn’t yet support streaming or downloading videos to your device. The app actually uploads all your videos to its servers and even generates thumbnails for them, but Senderek says the company needs more time to tweak its video compression technology before flipping the switch in the coming weeks. "Streaming video is a bitch," says Senderek, who’s worried enough about scaling his photo compression and storage tech to thousands of users on day one.

"Streaming video is a bitch."

Following Mailbox's lead, Loom will employ a waiting list, letting in new users every day until the list has ended. "It’s impossible to release Loom as a waterfall," he says. "It’s so data heavy — people will upload GBs in hours." Despite its wait list, Mailbox still struggled in its early days to keep up with demand, and experienced several outages within its first month in the wild, so Senderek wants to play it safe.

Dropbox, Google, Picturelife, Everpix, and many others have been moving quickly to seize power in the cloud photo and video space — all of which Senderek has tried and been dissatisfied with — and if Loom wants to succeed, it has to work reliably and move quickly. Launching apps on other platforms, like Android, will be a priority, as will launching support for videos. Some rivals like Stream Nation, which launched Wednesday, aren't as elegant as Loom, but already pack in many of Loom's missing features.

No photo storage service seems to be "the full package" quite yet, but with its combination of simplicity and great design, Loom has cemented itself as one of the foremost leaders to watch. And unlike many of its competitors, which seem dead set on creating a "private YouTube," like Stream Nation, or social network-cum-storage service, like Google+, Loom simply wants to let photographers move their libraries to the cloud and get back to shooting photos.