Share All sharing options for: Nvidia shrinks Kepler GPU down for tablets, hinting at gorgeous games for mobile devices

Nvidia CEO Jen-Hsun Huang said his company would bring its powerful Kepler graphics processor to "superphones." We're nearly there. At Siggraph 2013, the company's showing off a Kepler GPU that fits into a tablet form factor. With a power envelope of just two watts, Nvidia says that "Kepler Mobile" has far more raw horsepower than the graphics processor in the PlayStation 3 — and even more than a GeForce 8800 GTX desktop video card, which tore through the most demanding PC games six years ago. And yet Nvidia also says it uses one-third the power of competing mobile GPUs.

On top of that, Kepler Mobile supports the latest graphics standards like DirectX 11 and OpenGL 4.4, which could help make it a promising target for game developers in particular. Epic Games is already demonstrating Unreal Engine 4 on the new silicon.

Perhaps just as important, though, is where Kepler Mobile will wind up. It's part of the next Tegra mobile processor, codenamed "Logan." Nvidia says we can expect to see devices ship with the chip in the first half of 2014, bringing "power efficiency and performance that you've never seen before on a mobile device." There will even be a new Nvidia Shield gaming handheld with the silicon inside, confirms Nvidia's Matt Wuebbling. 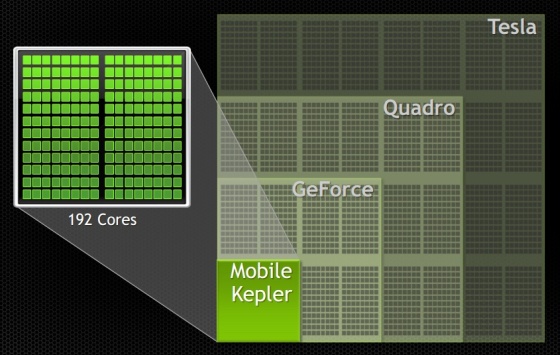 Needless to say, a two-watt Kepler Mobile doesn't have nearly the power of a 250W GeForce GTX Titan graphics card, even if they're built on the same architecture. You can think of Kepler Mobile as a chip off the old block: where a Titan houses 3,072 tiny little cores, and you can find 768 cores in a laptop-class GTX 765M, Nvidia's shaved off just 192 of them for this mobile variant. Still, those 192 cores can do quite a lot: just take a look at these video demos to see how far Nvidia's mobile graphics have come.