The Chromecast, a $35 dongle from Google that lets you stream videos from your phone, tablet, or PC to a television using Chrome, has its minimalist instruction manual printed on the inside cover of the box. There are just three directions: 1.) Plug it in, 2.) Switch input, and 3.) Set it up.

We just got our hands on the streaming stick at a San Francisco event, and it seems like a fairly solid little dongle, perhaps three inches long, made of firm textured plastic with a glossy clear band around the center, with an gold-plated HDMI port on one end and a microUSB port at the other. That's not to transfer data to or from the Chromecast, mind you, but something that you'll have to plug in and leave plugged in when you set it up. It provides power to the stick, and you can either connect it to a USB port on your television, or with a small AC adapter that comes in the box.

Google tells us the next part is fairly simple, too: the Chromecast dongle generates its own Wi-Fi hotspot, and you can connect to it with an Android, iOS, Windows, or Mac OS X app to pair it with your home Wi-Fi network. There's also a little button next to the microUSB port that resets the pairing process. You will need a Wi-Fi router of some sort, Google tells us, to give it internet connectivity and get all the ducks in a row. This isn't like Apple's AirPlay or Miracast, where there's a direct peer-to-peer connection: Chromecast is running web apps independently of your phone, streaming content from the internet rather than mirroring directly.

Of course, what you probably care about is how well the Chromecast works, and the answer seems to be fairly well, at least here at Google's event with the latest build of YouTube. Chromecast compatible apps automatically detect when there's a Chromecast on the same Wi-Fi network, and pop up a share button when they do.

Here, it took a few seconds to detect that there was a Chromecast stick — and the share button vanished for a moment when another person hijacked the television with a device of their own — but it did detect it automatically and a quick press later we were watching YouTube on television. We did notice a slight delay between the time we tapped the volume buttons on a Nexus 4 or Nexus 7 and the time the TV changed volume. The touchscreen volume slider appears to be disabled during YouTube streaming, probably because it can't keep up. 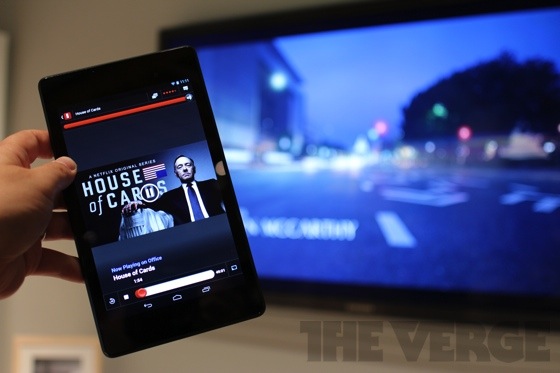 You can indeed surf YouTube for other videos without interrupting the program, and in Netflix as well, for that matter: the Chromecast can stream 1080p video to your television and at least on tablet, you can control playback, rate the title, or browse the whole catalog and add items to your instant queue while watching. It works pretty much just like you'd expect. Netflix 1080p streaming was the slightest bit choppy, but that could just be due to connectivity at the event.

Perhaps most interesting of all, we got to try a new beta feature of Chrome that lets you stream the contents of a web browser tab itself to your TV via the Chromecast. It's not particularly impressive yet: scrolling doesn't come close to keeping up with your finger, and there's visible compression artifacts whenever there's rapid motion: it's a lot like streaming game services like OnLive and Gaikai, but with a lot more delay. Google says it uses WebRTC, so it's basically online video chat repurposed to display anything you can see in a browser frame. Video plays with only a bit of chop and stutter, and lips don't quite sync up with the audio, which could be maddening for some. Don't expect this to be a surefire solution for watching Hulu without a subscription.

Still, Google's very clear that this is a beta feature right now, and Sundar Pichai told us that it shouldn't take long to leave the beta state. It requires some features that will come with Chrome 30 that should smooth things out, he said.

We'll keep playing with the Chromecast, and should bring you a full review sometime in the very near future.

More from this stream Google's Android and Chrome event: a new Nexus 7, Chromecast, Android 4.3, and more