Nearby, a computer image of a butterfly slowly moves its wings, causing the leaf it's perched on to sway. As you reach out, the projection flutters and jumps onto you. You feel a touch, and as you lift your hand to see what's happening you feel it moving up your arm. The invention that makes this illusion possible is called Aireal and Disney Research is showing it off at the Siggraph conference in Anaheim. The new haptic technology promises to let people interact with imaginary objects, rendered out of thin air.

Aireal works by generating a small vortex — a puff of high-pressure air — that it blasts at the user from up to three feet away. The tactile sensation that it creates isn’t that of air being blown onto you per se — it's the differential between the low-pressure air in the room and the high-presure vortex. These rings of compressed air are created by five miniature speakers while a nozzle hooked up to a pan-and-tilt controller aims them in the right direction, with a maximum resolution of 8.5 centimeters (just over three inches) in diameter — enough to isolate the thumb of an outstretched hand. 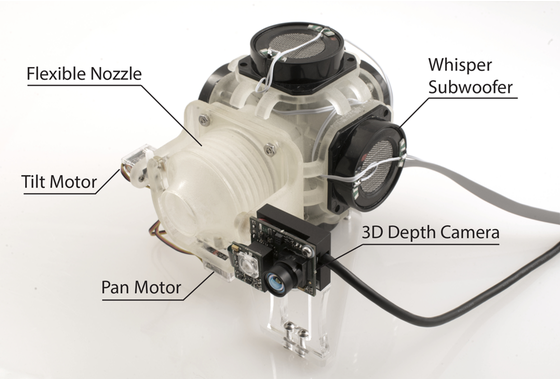 The engineers behind the project write that the system is even capable of creating "free air tactile ‘textures’ that allow the user to feel the properties of the objects by moving their hands in free air." And they point out that while the principles of air vortices have been observed and pondered for centuries, their study is the first in-depth look at this kind of haptic display.

The rotating motion holds everything together as the vortex moves forward

Here's how the vortices are formed: when you quickly push air out of a round hole, the molecules at the edge of the blast face more friction since they’re in contact with the aperture. The air in the center moves faster, rotating back toward the aperture and forming a ring, which gets pinched off when the puff of air stops. The rotating motion holds everything together as the vortex moves forward, which is what lets it fly through the air relatively undisturbed. It’s the same principle as blowing smoke rings. 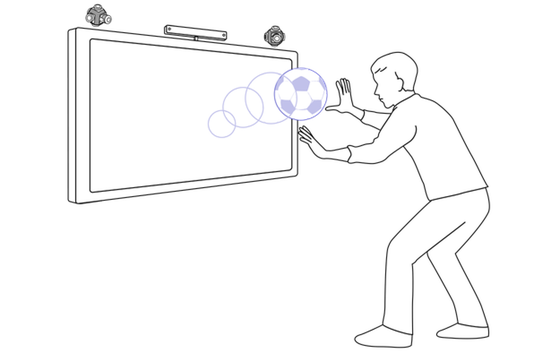 The researchers think that this kind of new haptic technology could be used not only to provide feedback for computer interfaces and video games (like the soccer goalie game pictured above), but also allow for new kinds of experiences like the butterfly on your houseplant — what they call "transient haptic displays." They envision a movie watcher getting hit with vortices when there's an explosion onscreen, possibly knocking papers off the living room table. And when combined with new, immsersive display technologies like Microsoft's Illumiroom, the possibilities get even more exciting. "We have only begun to scratch the surface of what is possible," says the team.