Put your face on a vampire hunter with Square Enix's 'Bloodmasque'

Share All sharing options for: Put your face on a vampire hunter with Square Enix's 'Bloodmasque'

Square Enix, perhaps most famous for its Final Fantasy franchise, has created Bloodmasque, a fighting game for iPhone, iPad, and iPod touch that puts you in the lead role. On starting a new game, Bloodmasque has you using your device's front-facing camera (or selecting a photo from your Camera Roll) to help shape your character's visage. You'll be asked to snap three shots of your face — one "casual," one "happy," and one "angry." After taking the shots, you'll see your face grafted onto a 3D model, and have the opportunity to tilt, stretch, shrink, or change the brightness of the image for a perfect fit. You'll then be able to choose an appropriate haircut (see below) and name before heading off on your quest. 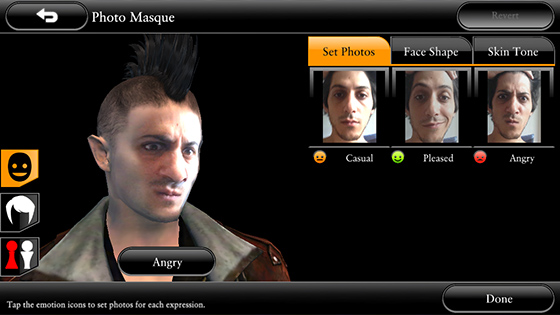 Bloodmasque is set in an alternate 19th Century Paris, where vampires have ruled for a millennium. You play a human-vampire hybrid, who's tasked himself with driving a stake through the heart of as many of the vampires as possible. If you've ever played an Infinity Blade game, you'll be familiar with how that goes down. Gameplay is basically reduced to working out your enemy's attack pattern before slashing, swiping, and tapping at the right moments to win each battle. The concept is a proven one, and as you progress through the game, the enemy's movements become more complex, ramping up the difficulty. You'll also collect weapons, armor, and other items to help you progress through the game. 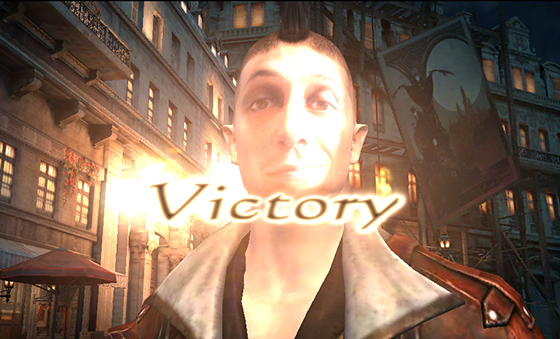 Beyond character customization, there's nothing particularly special about Bloodmasque. It's a fairly average game, and the controls don't feel as responsive as rival titles like Infinity Blade 2. Unless you really like the oft-tried-and-failed idea of putting your face on a character, it doesn't really do enough to justify its $6.99 price tag.