A squirrel in California has the plague. Should you be worried?

Share All sharing options for: A squirrel in California has the plague. Should you be worried?

This patient has symptoms of septicemic plague including necrosis of the fingers caused by gangrene.

Health officials in Los Angeles County announced yesterday that a squirrel found covered in fleas has tested positive for bubonic plague, the scourge that develops into the deadly pneumonic plague known as the Black Death and wiped out an estimated 200 million people in Europe during the 14th century. Last month, two pet dogs in New Mexico were also discovered with the disease, which is genetically very similar to the strain from the 1300s.

"It is the plague," Dr. Mark Dimenna, deputy of the Environmental Health Department, told local TV reporters from KOAT 7. "It is the bubonic plague, the Black Death. It’s the same organism that it always has been."

"It’s the same organism that it always has been."

Is the US facing an outbreak of the ancient epidemic? That’s unlikely, according to public health officials. Scattered cases of the plague in wild animals, domesticated pets, and humans happen every year. The plague was introduced to the new continent around 1900, long after the devastating outbreak in Europe. Between 1990 and 2010, there were 999 cases of probable or confirmed plague found in humans in the US, according to the Centers for Disease Control and Prevention. In recent decades, the US sees about seven cases of human plague a year. The plague can be successfully treated with antibiotics in most cases — an option our Medieval ancestors didn’t have — but the disease can still be deadly if allowed to progress.

Most cases are seen in the Western US in rodents, which get the disease from fleas. New Mexico typically sees about half of all plague cases in the country. Last year the state had one human case, one dog case, and one cat case; so far this year it's seen four dog cases. We’re actually in the middle of plague season now, as the majority of cases occur between late spring and early fall.

The plague is caused by the bacteria Yersinia pestis. It typically spreads from fleas to rodents to humans as bubonic plague, which causes swelling of the lymph nodes in humans and results in the characteristic bumps or "bubos" in the groin, underarm, or neck. Those infected may also experience sudden fever, muscle aches and headache, chills, and extreme weakness. Some animals, including cats and dogs, may not exhibit symptoms at all, however. 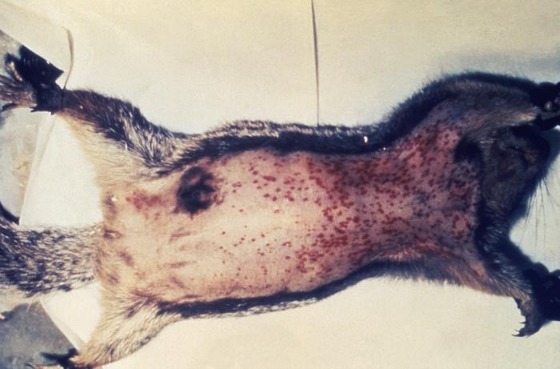 This squirrel infected with the plague has a petechial rash indicating hemorrhaging beneath the skin.

If allowed to progress, the bacteria can spread to all the major organs in between one and six days. It can cause rapid blood poisoning and gangrene, known as septicemic plague. Once it reaches the lungs it becomes highly contagious and can spread through the air, at which point it its known as pneumonic plague. It can cause human death in three days, although antibiotics have reduced the mortality rate to 11 percent.

The situation is much worse outside of the US. The World Health Organization estimates there are thousands of cases of human plague a year in central, eastern and southern Africa, South America, and in large areas of Asia, and mortality rates are much higher in some areas with poorer access to health care. There is a vaccine available, but it is rare and only available to professionals who are at high risk of exposure.

The plague does have a habit of suddenly reappearing after not being heard from in years. There was a minor outbreak in Libya in 2009, after the disease had not been seen for 25 years; similarly, in Algeria, plague was recorded in the 1940s, remained absent for around 50 years, and then reemerged in 2003. Despite the resilience of the bacillus, the vast improvements in public health have made it near impossible for the plague to spread the way it did in the Middle Ages.

However, because it is so contagious, the plague is often cited as having potential as a tool for bioterrorism. In 2009, there were reports that some 40 al-Qaida fighters had died in a failed attempt to weaponize the disease. The WHO denied this report, but fears remain.

"A bioweapon carrying Y. pestis is possible because the bacterium occurs in nature and could be isolated and grown in quantity in a laboratory," the CDC acknowledged. "Even so, manufacturing an effective weapon using Y. pestis would require advanced knowledge and technology." The government has been repeatedly criticized for not sufficiently addressing vulnerability against the threat of a highly contagious biological weapon such as the plague.

Officials in Los Angeles County have shut down three campgrounds for at least a week for flea extermination in order to prevent the plague from spreading further there. In the meantime, don’t pet any wild squirrels.