Keeping it simple: Chromecast, Google TV, and the zen of a $35 dongle

Keeping it simple: Chromecast, Google TV, and the zen of a $35 dongle

Google's combined Chrome and Android event yesterday should have had a relatively small impact: the Nexus 7 was already widely leaked and Android 4.3 was a very minor update. Instead, Google surprised us all with a tiny, $35 HDMI dongle called the Chromecast that captured our imaginations and seemed to finally answer a question that has been hanging over the company for years now: when will it finally figure out some kind of TV strategy?

The little device is useful, cheap, and thoroughly infused with Google's philosophy of cloud computing. We've already compared it to Apple's AirPlay technology, but the differences between the two services go beyond their technical capabilities.

Rishi Chandra, director of product management for Chromecast (and, not coincidentally, Google TV), says that Google is "making a bet, and it's a pretty aggressive bet." Google has finally found a strategy through which it hopes it can become as ubiquitous on televisions as it is on computers and mobile devices. But will it work? 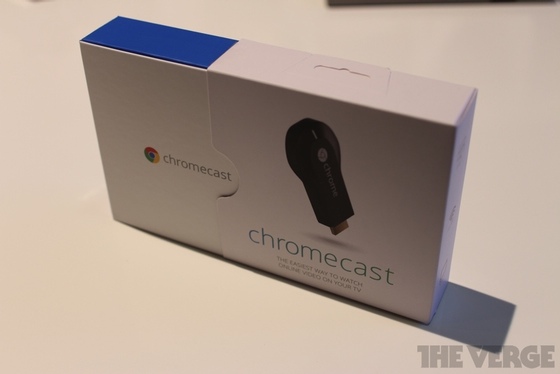 Chromecast is a device you plug into your TV that runs what Google says is a stripped-down version of ChromeOS, a description that undersells just how simple it is. "Literally it's just a browser content shell," says Chandra. All it can do is display content that's sent to it from the cloud or your computer. It supports HTML5 video, audio, flash, and that's honestly about it — local files, Quicktime, and Silverlight video aren't supported yet.

Technically, Chromecast uses a new "Google Cast" standard. Your device's apps and Chrome are able to know if there's a Chromecast device on your Wi-Fi network and tell their cloud counterparts to stream to it. That's one of the reasons that it's limited to working with Chrome and a few specific apps: each needs to implement the Google Cast SDK to work with it.

Because of this setup, Chandra says that Google is not tracking which videos you're watching, despite the fact that much of the Google Cast operation happens on Google's own servers. "All we will know is that we received something to send to somebody else. We have no information about the actual message itself." While you can choose to opt into anonymous, aggregated user tracking, Chandra tells us that Google has no intention of turning Google Cast into an ad platform.

Although the vast majority of what you'll play on Chromecast comes directly from the cloud, Google does have a Beta feature called "Chrome tab projection" that allows Chrome to send web pages directly from your computer to a Chromecast dongle. Chandra tells me that this happens locally over your Wi-Fi network and not through Google's servers. This feature uses a relatively new standard called WebRTC, which allows web browsers to communicate directly with each other and is the basis for a few video conferencing apps.

Last, but certainly not least, Chromecast has hardware-level DRM encryption. It's what allows Chromecast to work with Netflix at 1080p. Google says that Netflix has specific clauses in its content contracts that require any device that receives a full 1080p HD stream to be protected in this way. 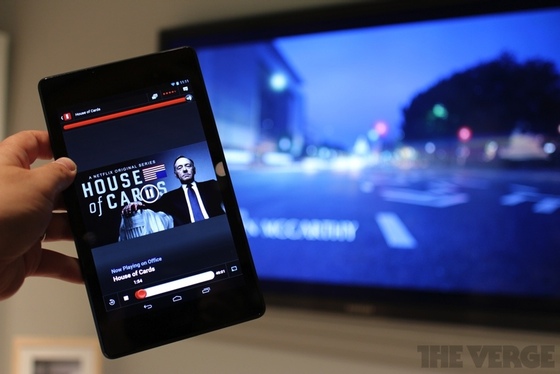 Chromecast is a Google-style solution to the technical problem of getting content on your TV — it’s almost like the Nexus Q, but done right. Where Apple has a unified ecosystem of hardware products that it can test and optimize for compatibility, Google needs to solve for a vast array of manufacturers and software. Faced with a classic cross-platform conundrum, Google is defaulting to a classic cross-platform solution: web standards infused with Google services.

A cloud-based answer makes perfect sense for Google for a variety of reasons, not least of which is that the company knows what it's doing there and has more control over the experience. Yet in avoiding the thorny problem of hardware fragmentation Google has run straight into the equally difficult issues of app support.

Google will need to go to each and every service and developer and exhort them to support Google Cast. Though Chandra makes the case that implementing the SDK is relatively easy — especially for those that already support HTML5 or Flash on the web — it's nevertheless going to be a slow process.

Developers are likely to be loathe to support the standard until there's widespread adoption, a classic problem of chicken and egg. Hence, Chromecast's low price is partly a function of its simple parts and partly a way to help jumpstart the process and convince developers to get on board. 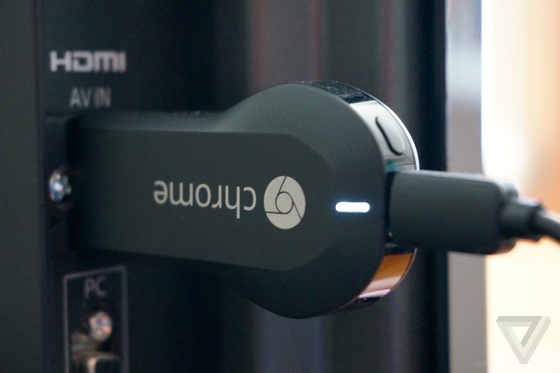 Media executives love nothing more than making arbitrary distinctions between devices — especially television — and enforcing different rules and different prices for each. Google Cast "tackles" those issues by simply accepting them: there's no need to block because it only plays what is specifically sent to it. "It's kind of the reverse," Chandra says. "If you want to do the model we talked about, streaming from the cloud, I need your full cooperation. I can't just go pull content from the cloud independently from you working with us."

In that sense, Chromecast is a content company's best friend and Google has no intention of disrupting their device rules. Chandra tells us flat out that "if it's not allowed to be played on a television then it will not work with Chromecast."

Unfortunately, Chrome tab projection isn’t really a useful workaround. WebRTC doesn't have the same benefits of low-latency and high-bandwidth that you get with something like AirPlay or even Miracast. In our brief testing, videos streamed over Google Cast had audio sync issues, and Chandra tells us that "around certain Wi-Fi configurations we're not as resilient as we want to be." Although, as Chandra says, "there's no restrictions on what can be done" with tab projection when it comes to content restrictions, streaming a Hulu video will not be an enjoyable experience. As for future restrictions, Chandra wouldn’t comment on hypotheticals, "Our stance right now, what we're enabling, is no different than an HDMI cable connecting your laptop to your TV."

It also only works in Chrome and specific apps, a significant limitation. That means that your local content, like your photos and videos, will be difficult to get on your television. Calling streaming local content an "open question," Chandra says "I'm not going to say we're not going to do it." For now, users will need to find a way to get their content into the cloud where either Chrome or an app can access it and stream it. Chandra believes that this issue will become less problematic over time: "At the end of the day, we're Google, we assume more and more stuff is going to the cloud."

Those limitations also preclude any sort of real games from working with Chromecast — for now at least. High latency and the lack of support for direct, local streaming means the kind of tablet / TV gaming combinations we're seeing on iOS with AirPlay aren't possible yet. "I think gaming is an obvious use case that we want to continue to invest in," Chandra says, "but from my standpoint it's not the number one priority for us." 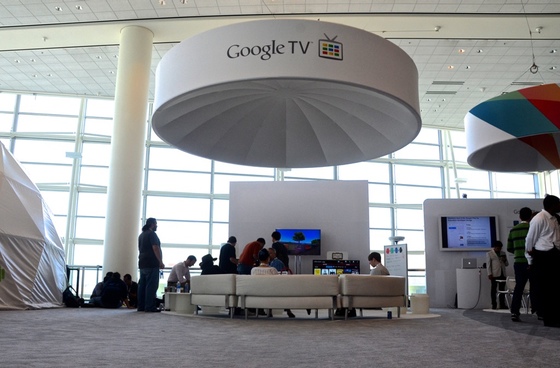 Despite — and because — of all those limitations, Chromecast seems like a compelling device. There are as many different ways of getting web content to a TV as there are living room setups, but the Chromecast's price and simplicity has a chance to beat a lot of them. It's the most coherent and viable living room solution that Google has ever produced.

However, that's not exactly high praise. Google's other foray into the living room, Google TV, can only be characterized as a failure. Chandra, who manages both products, probably doesn't see it that way, and says that both products are "complementary." Chromecast isn't going to replace Google TV. In fact, Chandra says that Google TV will support the Google Cast standard, though he couldn't say when.

"We don't think there's one device that's going to rule them all."

"We don't think there's one device that's going to rule them all," Chandra says. Parsing out how Google believes these two products fit into a living room strategy requires figuring out just what Google has planned for its ill-reputed TV product. Chandra makes the distinction this way: there are still millions upon millions of TVs sold every year, and "they're going to have an operating system built into it, and we believe that operating system should be Android, which is what Google TV is based on." For the hundreds of millions of TVs already out there, Chromecast is literally a plug-and-play solution.

When discussing Google TV, it's de rigueur to mention former Google CEO Eric Schmit's ridiculous prediction that "by the summer of 2012, the majority of the televisions you see in stores will have Google TV embedded." That obviously didn't come to pass, but Google isn't giving up on the market just yet. Instead of taking on the Roku and Apple TV directly, Google seems to be focusing on convincing OEMs to build it into TVs. Chandra says that, compared to Chromecast, "Google TV is really focused more on the embedded TV and set-top box market."

Google needs to get a foothold in the TV space now

Convincing the likes of Samsung, LG, and Sony to give up their bespoke Smart TV systems and switch to Android is a long, slow game with a very high risk of failure. It's a strategy that doesn't drive consumer adoption now. "Now" is when Google needs to get a foothold in the TV space, before Apple and Microsoft find a way to take over the market.

Chromecast is far from a complete solution to dominating the living room, but Google TV is the perfect example of how an all-in-one solution can turn into a disaster. If you were looking to quickly grab a piece of the action in television, you could do a lot worse than a $35 dongle that easily plays Netflix and YouTube videos.