America’s use of drone strikes to carry out targeted assassinations abroad isn't exactly winning worldwide support, but even when looking across a broad cross-section of countries, there is one surprising consistency: women are far more likely than men to object to drone strikes overall. A new Pew study shows that across 12 of 39 countries surveyed around the world, more than one in ten fewer women than men supported "the United States conducting missile strikes from pilotless aircraft called drones to target extremists in countries such as Pakistan, Yemen, and Somalia." The difference was most stark in Japan at 30 percent, but even in the US, where the strikes have more than 60 percent support overall, women are 17 percentage points behind their male counterparts. 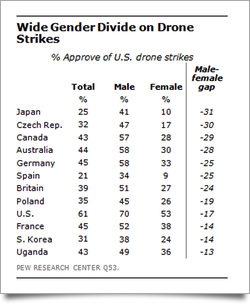 Bruce Stokes at Pew writes that "gender gaps are also often seen in global surveys over the use of military force, with women far less likely than men to say that force is sometimes necessary in the pursuit of justice," although he notes that "the gender difference over drone strikes is unusually large." The Atlantic points to a 2003 study examining "baseline average foreign policy restraint," showing that men are roughly 12 percent more likely to support foreign military action than women. The numbers bolster the idea that drone strikes in particular engender different feelings among respondents than conventional warfare like the use of ground troops or ordinary air strikes.

Unsurprisingly, very few countries outside of the US exhibited majority support for unilateral drone attacks — only Israel and Kenya, with 64 and 56 percent support respectively.