You can win hearts, or you can draw eyeballs

As much as costumes and badges, street preachers are a part of Comic-Con. Some simply hand out tracts or display scripture, while others deliver sermons or pepper their signs with topical references. "Don’t be Comic Conned!" reads one. "Your life is not fiction."

The preachers have been there for years, promoting religion next to company booths passing out party invitations or hawkers carrying cans of Coke. But when I first saw them, I didn’t realize that I was about to witness one of the ugliest facets of Comic-Con: the subset of vicious provocateurs who set out to "win" people over by telling them they’re going to burn in Hell... and get the exact reaction they were really looking for.

"They wouldn't keep doing it if it didn't work."

Though the sign-bearers deny it, there’s a common perception that they’re protesting Comic-Con, and they periodically draw counter-protesters carrying signs like "R’hllor saves!" and "Bring back that show I like." Other fans try to debate the science of evolution or the ethics of homosexuality. But a few wonder if, despite the general indifference and anger, they might be getting results. "How many people do you think talk to them?" I heard while sitting in line one day. "They wouldn’t keep doing it if it didn’t work."

My first, brief contact was promising. A clean-cut teenager holding one of several yellow signs dotting the sidewalk said he’d had plenty of negative reactions, but at least a few people took the tracts he was handing out, and he remained stoic about the rejections. Few people, however, seemed to pay much attention to him. The real success was a pair of middle-aged men standing in the roped-off intersection between the convention center and the neighborhood beside it. Breaking from the more usual Biblical exhortations, their signs condemned drunkards, abortionists, atheists, "revelers," and "general heathens," and their inflammatory, megaphone-amplified speeches made them a lightning rod. 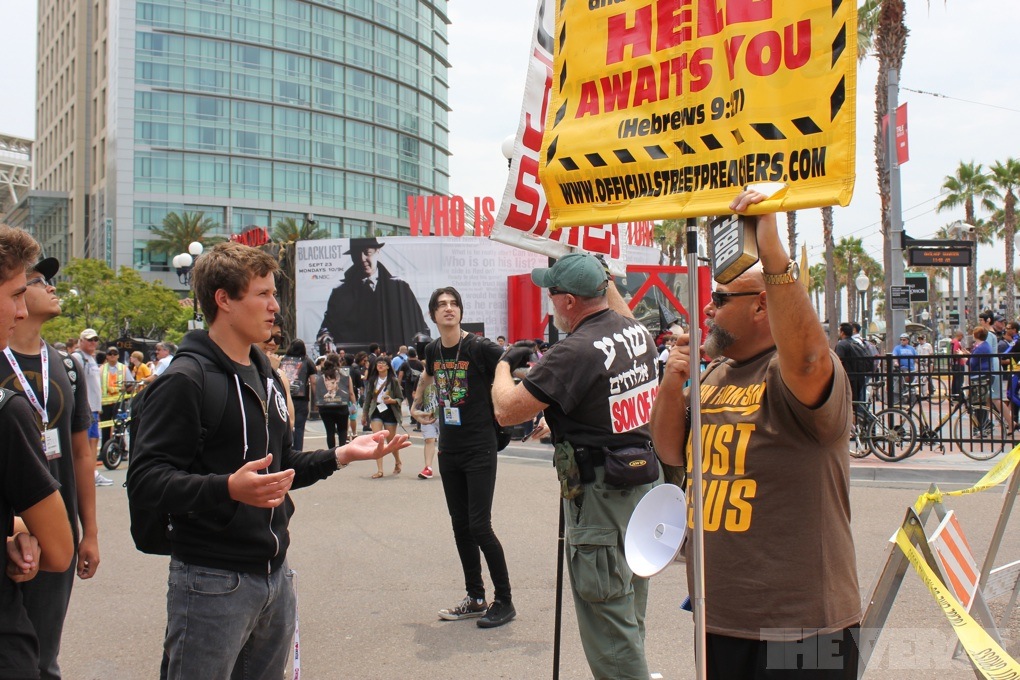 This wasn’t Westboro Baptist Church: the message was at least ostensibly meant to convert people. And one of the men, tall and white-haired, was friendly and more than willing to talk to me. "You don’t see a lot of sin here," said the man, who I'll call "Mike" for now. "If it were something like Mardi Gras you’d see a lot more sin, a lot more drinking." His calling wasn’t precisely a common one, but Mike seemed, at first glance, a fairly ordinary man.

Soon, he was telling a young woman to 'get back in the kitchen'

"Some people ignore us, some people yell at us and flip us off," he continued. "Some people throw things at us. But this is what the Bible tells us to do." I felt real sympathy for him — it takes bravery to share something personal with an unsympathetic audience. As we kept talking, though, his co-preacher (I'll call him "Ronald") began an angry, steadily escalating fight with skeptical fans. At first, I was able to tune him out; soon, he was screaming at a dark-haired teenager about "castrated" Christians and the origin of the universe. Fans, meanwhile, were shaking their heads or jumping in to support anyone trying to convince the preachers that their message wasn’t doing its job. When I asked, neither man could recount a single positive interaction with a listener, and both tended more towards insults than anything else. A few minutes after I spoke to him, Mike was telling a young woman to "get back in the kitchen," prompting fury in her male friend. 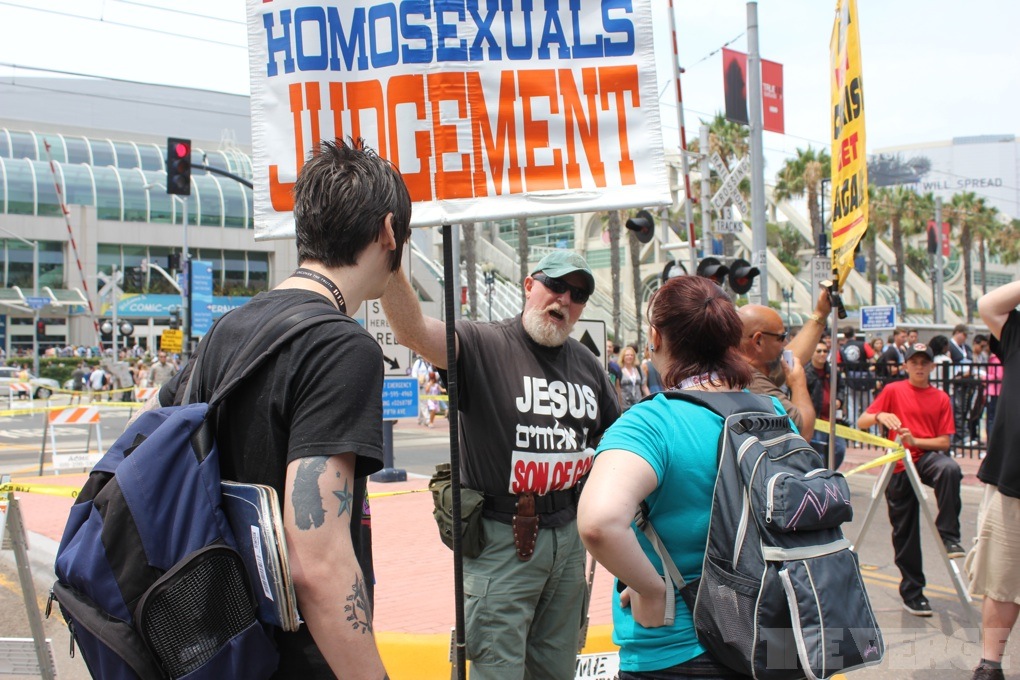 His evolutionary arguments running out, Ronald told the teen that he was possessed by a demon. Another con-goer jumped up, gave a quick "A demon? I've got this!" and started to perform a mock exorcism. The recipient pretended to stagger back and then lifted his hand for a high five, and the crowd laughed. It released a steadily mounting tension, but it also turned the scene into even more of a sideshow. An evangelist standing on the opposite corner seemed mildly embarrassed for the men behind him. "If people hate what I do, I want them to hate the message, not who I am," he said. But like the others, he seemed to have little idea what would convert people, going by negative reactions to gauge whether he was doing the right thing. "If you look at the word of God, the word of God didn't attract people," he said. "It repelled people!"

Though the system seemed futile to me at times, I think the evangelists knew what they were doing. Ronald described his actions as a "warning," and these tactics were the same ones somebody would use to derail a conversation anywhere else, drawing people in with a "controversial" argument and keeping them there with personal attacks that were by turns unintentionally funny and infuriating. The strategy, in fact, wasn’t all that different from your common internet troll, and at times it was hard to believe the men were for real — at one point, Mike tried to illustrate his transformation by very casually admitting to rape. 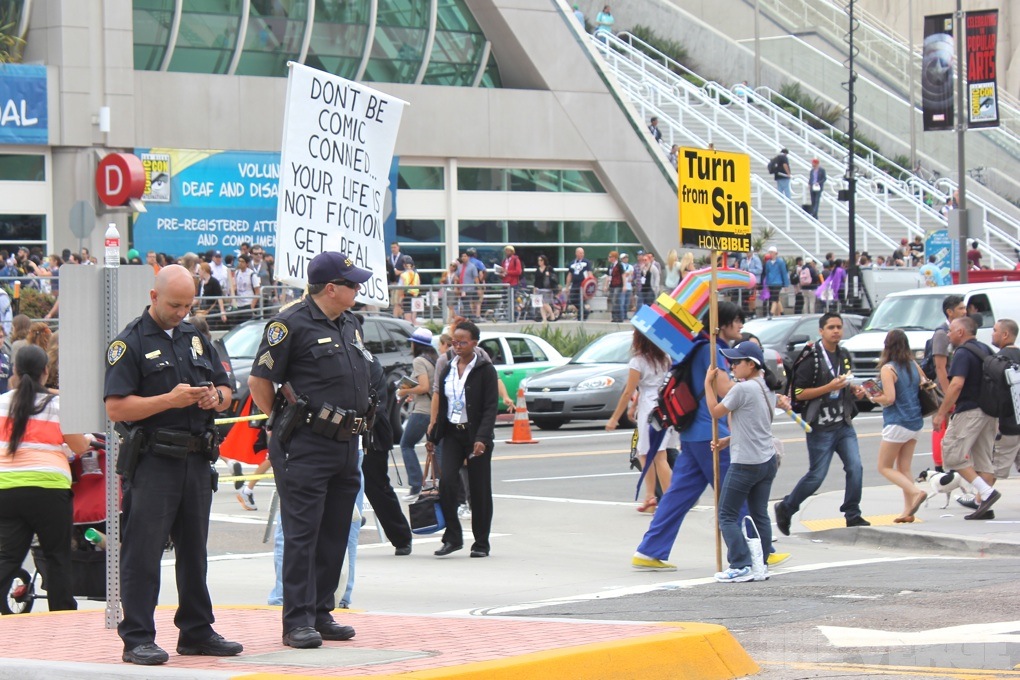 As far as I could tell, though, they were entirely sincere, and what they were doing was fairly rational. Emotionally speaking, they were getting a chance to prove to themselves that they were a persecuted minority, hated for their opinions. Practically speaking, they were getting a lot more attention for their cause than anybody else. These men weren’t trolls. They were the result of a tradition that’s defined "evangelism" as the equivalent of an internet pop-up ad: as long as somebody sees it, you’ve done your job.

An hour or two later, I met a small woman passing out tracts far from the intersections most preachers occupied. Her self-appointed mission, as far as I could tell, was to undo the damage caused down the street. "We're not like those Christians who preach hate to everyone," she assured me. Then she managed to do something I had not seen all day: explain why I should love the thing she was willing to stand in the San Diego sun for hours to share.

Whether or not I agreed with the tenets of her faith, it made me angry to see the possibility of real interaction drowned out by self-righteous ranting. At Comic-Con, generally one of the friendliest geek love-fests around, the most visible face of Christianity will probably always be the ugliest. Do they get results? Not in the way you’d think, but in a way that makes sense to anyone who’s read a comment section. Even if they’re not trolls, we just can’t help but feed them.