Share All sharing options for: The curious case of Kandinsky: how Communist Russia enabled art forgers to make millions

On the morning of May 12th, more than 100 police officers stormed a house in Wiesbaden, Germany, as part of an enormous raid that spanned three nations and several warehouses, businesses, and art galleries. Their target: two men accused of masterminding a multimillion-dollar art-forgery ring.

The arrested suspects, aged 41 and 67, have not been identified and are awaiting trial. But the nearly 1,000 fake paintings and documents discovered in May speak to the breadth of their alleged operation. German police say the men have sold more than 400 forged paintings attributed to Russian avant garde artists like Wassily Kandinsky, Kazimir Malevich, and Alexej von Jawlensky. The works were sold for between four and seven figures, including two that recently went for a combined $3 million.

Germany's federal police described the raid as an "important blow" to the international forgery market, though it's far from unique. Over the past two decades, police have seen a surge in fake Russian avant garde paintings, fueled by a combination of aesthetics, economics, and Communist-era politics. Paintings from this era — spanning from the 1890s to early 1930s — have proven relatively easy for forgers to copy, despite recent advancements in forensics and imaging technology. But why Russia, and why now?

Why Russia, and why now?

For one, Russia's turbulent 20th century makes it difficult for experts to establish provenance — a paper trail of certificates and previous sales receipts that help bolster a painting’s authenticity. In the case of many avant garde paintings, these documents may have been lost or destroyed over time, and are often forged with relative ease. (Faked certificates of authenticity were among the 1,000 objects discovered during the raid in Germany this Spring.)

After assessing a painting's provenance, experts analyze its composition — a task that combines both aesthetic and scientific expertise. Ultraviolet (UV) lamps, X-ray, and infrared radiation are among the most common imaging tools used today, allowing investigators to see where fresher paint may have been applied and exposing the artist’s original sketches behind the paint layer.

"If you see changes underneath the final composition, that's a good sign that the work likely isn't a copy," says Dr. Francesca Casadio, co-director of the Northwestern University-Art Institute of Chicago Center for Scientific Studies in the Arts (NU-ACCESS). "If someone copies something, they don't change their decision making process, they don't erase or start over." 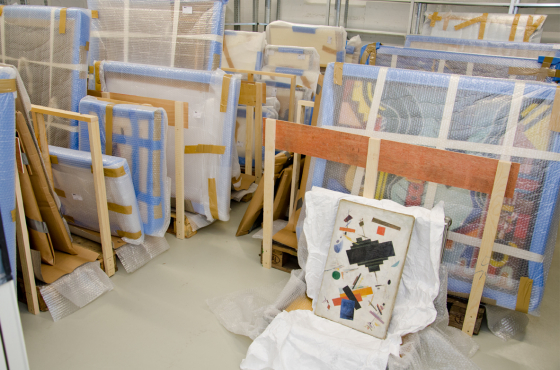 One of the allegedly forged paintings discovered during the Wiesbaden, Germany raid in May. It was labeled as "Kazimir Malevich — Supremus". Photo provided courtesy of Bundeskriminalamt (BKA)

Three years ago, Steven Saverwyns, a researcher at the Royal Institute of Cultural Heritage in Brussels, used raman spectroscopy to prove that six paintings attributed to the Russian avant garde painter Liubov Popova were in fact forgeries. Raman spectroscopy is a method whereby photons are beamed at a painting to determine its chemical composition, based on patterns in the way the photons interact with the pigment.

In this case, Saverwyns found that the pigment compounds in the purported Popova paintings could not have been in use during Popova’s lifetime because they were patented after her death. It’s here, in the molecular details, where many forgers trip up.

"There is a lot of craft and effort put into making very realistic, very aesthetically accurate images," Casadio said in a phone interview with The Verge. "But there's a little bit of sloppiness when it comes to picking pigment materials. A lot of the materials we find in these forgeries were patented long after the artist died."

But the problem with the Russian avant garde is that many materials used by Kandinsky are still used today. And as Casadio notes, forgers have become more intelligent over time, taking greater care to use historically accurate pigments.

They've also become more drawn to Russian art in recent years, due to both skyrocketing prices and convenient aesthetics. Unlike older, realist art, paintings by Kandinsky and his contemporaries — with their geometric patterns and abstracted forms — are relatively simple to copy.

"It's hard to replicate a Rembrandt, but it’s much easier to draw a black square."

"The biggest problem is style," says William MacDougall, director of the London-based MacDougall's Auction House, which sells Russian art. "It's hard to replicate a Rembrandt, but it’s much easier to draw a black square and convince someone that it's avant garde."

The fall of Communism has fueled the avant garde black market as well, albeit indirectly. When Joseph Stalin came into power in the mid-1920s, he cracked down on Malevich and other artists, excoriating their work as "bourgeois" and confiscating many paintings. Once Russia liberalized its economy in the 1990s, Malevich and his contemporaries assumed a more lofty status among Moscow's ultra-rich oligarchs, and prices shot skyward. By MacDougall's estimates, prices for avant garde works have increased by "800 or 900 percent" over the past 20 years.

The spate of Russian forgeries has certainly made buyers more cautious — MacDougall says that his auction house rejects about 80 percent of all the paintings it receives — though it doesn't appear to have had a significant impact on market prices. Last month, buyers spent more than $76 million at a series of Russian art auctions across London, marking the highest total in five years. 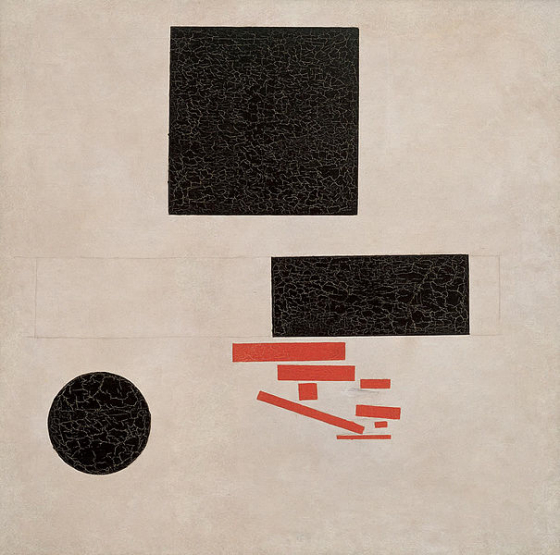 Chemical analysis also requires deeper contextual knowledge — both of an artist's portfolio and the scientific developments of his or her era — to determine whether a certain material could have been used at the time.

"For all the analysis you do, it’s more or less meaningless without an understanding of the history of materials," says Dr. Nicholas Eastaugh, director of research at Art Access and Research, a London-based forensics lab. "You might have a patent date [for a given material], but you don't necessarily know whether the chemistry was well understood and widely used before the patent was taken out."

There's an important distinction between identifying forgeries and authenticating authorship, as well. Chemistry can determine whether a work could have been painted by Kandinsky, but experts are still needed for confirmation.

"No science can tell you if a certain artist painted something."

"There's no science that can tell you whether a certain artist painted something," Cassadio explains. "You still need the connoisseur — someone who’s familiar with an artist’s work and who has looked at hundreds of their paintings — to authenticate. So there has to be a constant conversation between the two disciplines."

But researchers are trying to tilt the scales toward the scientific, raising new philosophical debates in the curator community. In recent years, computer scientist have developed algorithms developing algorithms capable of ascribing authorship to a painting based on its brushstroke patterns, textures, and other qualities. The idea is to train computers to instantly recognize an artist's "fingerprint," though it remains a somewhat nascent field.

"Why should we trust a connoisseur but not a computer program?"

The specter of a machine-led future has irked some connoisseurs — especially when science disproves their claims — raising philosophical debates between forensic and aesthetic experts.

"It's a question that comes up in museums and art circles: why should we trust the eye of the connoisseur but not a computer program?" Casadio says, though she predicts that connoisseurs will always have an important role to play. "A machine gives you incontrovertible data, but it's still the human that tells it where to look, what to analyze, and that requires expertise."

As scientists continue searching for more accurate ways to flag frauds, forgers are doing their best to keep up — fueling what Eastaugh describes as an "arms race" of intelligence. Experts acknowledge that such lucrative prices will likely make it difficult to keep forgers at bay, but MacDougall sees some cause for optimism.

"There have been several high-profile police cases as of late," he says, referencing the May raid in Germany. "So at least they’re getting caught."

Not all, though. The two men captured in Germany two months ago are believed to be part of a six-person operation spread across Israel and Switzerland. The other four suspects are still at large.