Spec Sheet: how Nokia's biggest Lumia competes in the mid-range

Share All sharing options for: Spec Sheet: how Nokia's biggest Lumia competes in the mid-range

Nokia may get the most attention for debuting incredible smartphone cameras and gorgeous hardware, but all the while its been steadily putting out less expensive devices to help cover the entire market. Just this week Nokia unveiled the Lumia 625, its latest mid-range device and its biggest Lumia yet. At an unsubsidized price of only £200 (around $307) before sales tax, it could be a good deal for those looking to stay off contract. But up against lower-cost devices from the two biggest mobile OS makers, Google and Apple, as well as other inexpensive alternatives from Nokia itself, consumers looking for a deal have plenty to consider. 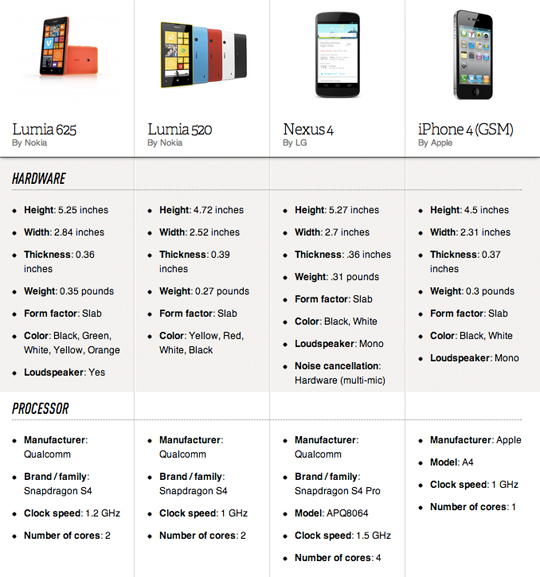 Google's Nexus 4 is almost the perfect match for the Lumia 625. It has nearly the same price — just $299 off contract — has almost identical dimensions, and also comes with a 4.7-inch display. But on the inside, the Nexus 4 has a lot of advantages: it has a lot more RAM, a higher resolution camera, and a much more pixel dense display. The Lumia 625 could be seriously hampered by its poor viewing angles and low resolution display, but the tradeoff might be worth it: Nokia's latest includes LTE, unlike the Nexus 4 and all but the newest iPhone.

Though a low-cost version of the iPhone has been rumored all year, it hasn't materialized yet, and Apple is still trying to angle its older devices as an inexpensive alternative. Right now, its least expensive unsubsidized smartphone is the three-year-old, $450 iPhone 4. Despite its age, the iPhone 4 doesn't fall all that far behind the others: it has a high-resolution display, double the internal storage of both the Lumia 625 and the Nexus 4, and a camera that shouldn't fall far behind any of the others. On the other hand, small displays are going out of style, and the iPhone 4 is stuck with a now-diminutive 3.5-inch screen.

For those on even more of a budget, Nokia's latest may not even be the best deal to be had on a Lumia. Beneath the Lumia 625, there's still the Lumia 520, which came out back in February and is now being sold off-contract by AT&T for just $99.99. The phone is a little bit thicker than the others, and it doesn't have LTE. But its 4-inch display has the exact same resolution as the Lumia 625, which should make it sharper — albeit just slightly smaller. Internally, the 520 isn't too different from its pricier sibling either, making LTE the biggest reason for deciding to take the step up.

The real question is how the devices will hold up

Fit and finish aside, one of the biggest concerns that budget shoppers should have is that their device is likely to be outdated fast — if it isn't already. So far, all four of these devices are still running the latest version of their operating systems. The Nexus 4 was upgraded immediately on Android 4.3's launch, and it should still be running apps pretty smoothly. The iPhone 4 should receive the same quick update when iOS 7 is released this fall, but Apple is likely to drop support for its aging device sometime soon. The iPhone 4 is also already a bit sluggish when it comes to newer apps, suggesting that it isn't the most future-proof device you can get at its higher price range.

The good news for both Lumias is that their processors don’t fall drastically short of Nokia’s current flagship, the Lumia 1020. But even so, both devices could be seriously limited down the road by their slim 512MB of RAM. When it launches later this year, the Lumia 625 could still be a deal for those looking for LTE, but the Nexus 4 might be the most future-proof of the four devices.

There were a few other big additions to the database this week:

If you want to learn more about any of the products mentioned above, all of our information on them can be found through the database box located beneath the article. For more on cellphones, laptops, and just about every product around, you can check out the full Verge Database right here.