Google's Hugo Barra: Android tablets have 'been lagging,' but change is coming

Can the Nexus 7 fulfill its destiny of making other Android tablets better?

Share All sharing options for: Google's Hugo Barra: Android tablets have 'been lagging,' but change is coming

The market for Android tablets is exploding. From the end of 2012 to the end of this June, Android tablet activations jumped from 10 million to 70 million. Nearly one in every two tablets sold nowadays runs Android, Google says. And of all the Android tablets sold over the last year, more than 10 percent were Google's Nexus 7, elevating the small slate to blockbuster status for the Nexus line. But as big as the growth spurt is, Android tablets still lag behind Apple's iPads — not only is there an undeniable lack of compelling tablet apps, Google executives say hardware needs to step up, too.

In what's becoming an annual tradition, Google is insisting that the app situation on Android tablets is improving. And while Android currently offers many great tablet apps — Google+, Pocket, and Flipboard are solid examples — it still can't come close to matching the number of iPad-tailored apps found on iOS. Popular tools like Twitter, Rdio, Spotify, Dropbox, and Yelp get tablet-specific experiences on the iPad, but their Android counterparts are little more than blown-up phone apps. Hugo Barra, Google's vice president of Android product management, believes the disparity is shrinking. "The absolute position that we're in is one where well over 60 percent of the apps that you'd expect in a given category are already available with a decent tablet UI," Barra tells The Verge. While 60 percent is better than nothing, it's far from 100 percent.

"The Android ecosystem hasn't yet put its best foot forward."

Android's nagging tablet app problem is a long standing and well known issue, though Barra rightly argues that the situation has vastly improved compared to a year ago — and it's no fluke. Google had been working to address the problem for a long time, and over the last 12 months, the company published a "Tablet App Quality Checklist" that spells out how to make tablet apps not suck, run "Developer Stories" on its corporate blogs in a bid to inspire lagging developers, and created a section of Google Play devoted to showing off tablet apps. Gaming is another example where Android is making big push, Barra says. On Wednesday, Google began rolling out Android 4.3 which includes Open GL ES 3.0 support for faster and more detailed graphics rendering. The company also introduced a new Google Play Games app that lets users see what their friends are playing and track achievements. Barra believes developers are responding to the tablet gaming push. "If you look at the top 20 highest grossing game developers on iOS and Android, 19 of them are on Android with the majority of, if not all of, their titles," he says. While Barra is correct in arguing that Android gaming has improved, most developers still launch their games on iOS first, and key franchises such as Infinity Blade remain painfully absent. 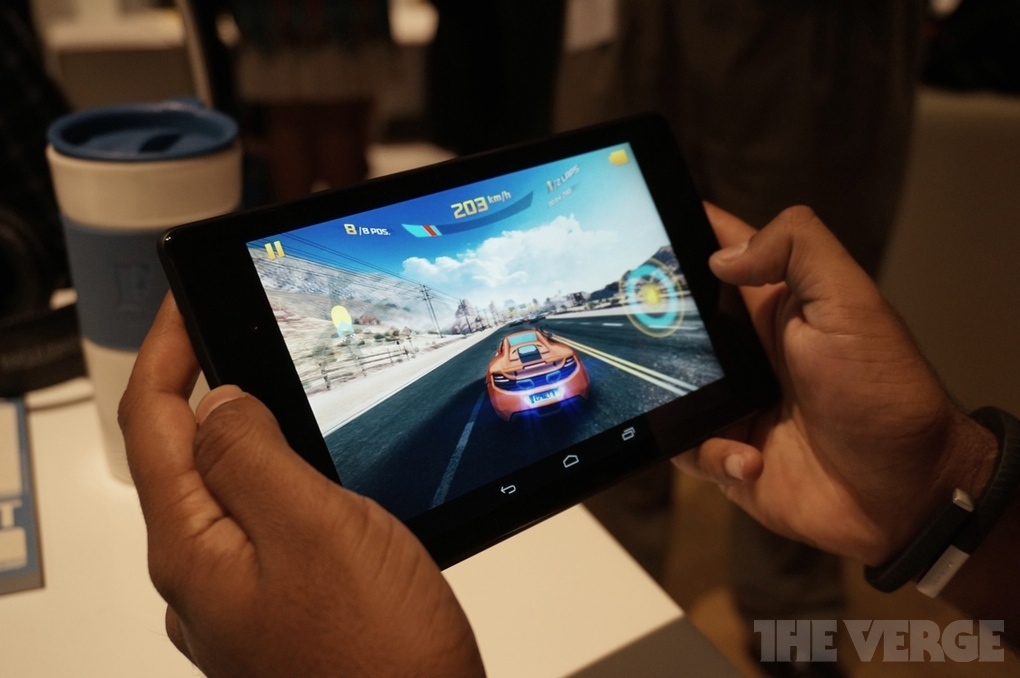 Whether you agree with Barra's confidence in the situation or not, you may be surprised to hear he's not impressed with most Android tablet hardware. "I really do think that the Android ecosystem hasn't yet put its best foot forward, when it comes to tablets," he says. This is where Google's Nexus line comes into play. Dave Burke, an engineering director for Android, says that the Nexus line doesn't exist simply to make Google "Why hasn't someone done that on the tablet?" money, but rather, to show manufacturing partners just how good an Android device can be. Barra believes that Android tablet makers can do better than the hardware they're producing today. "If you look at the execution that HTC did on [the One smartphone], it's pristine," he said. "Why hasn't someone done that on the tablet? Or on like ten tablets?" Part of the reason that Android tablets lack the sophistication of devices like the HTC One is pricing, Barra tells us. "I think we are perhaps coming close to it, but this is a $200 device," he says of the Nexus 7 and the HTC One's build quality. "If you were to price it at $300 or $400 you could do something a little bit more in that territory in terms of polish and finish and materials and so on. Why hasn't that happened yet?"

Barra's harsh words for OEMs are symptomatic of the Nexus 7's rising star: Google's not just making reference designs now, it's competing. His position makes even more sense when you consider the possibility that Google is actively hinting at future products that will solve this so-called problem. Sundar Pichai, Google's senior vice president running Android, has reportedly said a new Nexus 10 tablet is set to arrive in the near future. While Barra didn't go so far as to confirm specific devices himself, he did point to the Nexus 10's $400 price point as an area to watch. "We have a decent sense of what people are working on," he said. In other words, higher-end hardware than the Nexus 7's low sticker price allows could be on the way.

The Nexus 7 can't do this alone

But so far, the Nexus 7 stands alone as a retail success for Google. It's sold far better than any other Nexus product, and Google cites it as a device that has pushed the entire Android ecosystem forward. Google believes that the Nexus line will help foster a more competitive Android ecosystem. However, Nexus 7 can't do it alone, and Barra believes that help — on the hardware side at least — is on the way. "Doing that at the $400 category can be done and it will," he said. "In my opinion, the Android ecosystem has been lagging behind a little bit but is catching up." Still, having the fastest, thinnest tablets in the world won't mean much if the app you're looking for just isn't there.