Activists storm office of Congressman who voted for NSA spying

Share All sharing options for: Activists storm office of Congressman who voted for NSA spying

Six activists from the anti-surveillance group Restore the Fourth paid an unexpected visit to the office of a New York Congressman in protest of the vote which allowed the National Security Agency to continue collecting Americans' phone records without a warrant.

The action is intended to call out Rep. Gregory Meeks (D-NY) and the more than 200 other members of Congress that voted down an amendment last week aimed at curtailing the NSA's collection of domestic calling records. The group said they wouldn't leave until Meeks apologizes for his "no" vote and commits to fighting against surveillance programs which collect data on Americans without a warrant or suspicion of wrongdoing.

"Rep. Meeks #Voted4BigBrother and against the 4th Amendment."

"Representative Meeks #Voted4BigBrother and against the 4th Amendment, his constituents, and the rights of every American," said Ben Doernberg, a Restore the Fourth organizer and one of the sit-in's participants. "Perhaps Meeks’ largest election campaign donor over the last 3 years, AT&T, which charges taxpayers $325 for every wiretap it activates, played a role in his vote." The group also delivered a "thank you" cake to the office of another New York Congressman, Rep. Hakim Jeffries (D-NY), who voted for the anti-spying amendment. 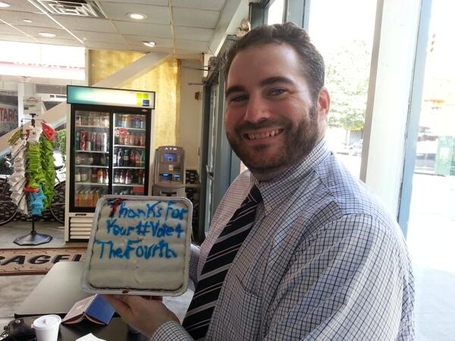 Led by Reps. Justin Amash (R-MI) and John Conyers (D-MI), the amendment proposed adding language to a defense spending bill forbidding the NSA's indiscriminate collection of phone records by limiting the program to "people suspected of involvement in a terrorist plot." The measure received strong bipartisan support, but was narrowly defeated in a 205 to 217 vote after last-minute lobbying from the intelligence community and the Obama administration. However, the close call has demonstrated strong support for NSA reform within Congress. Recent polling also indicates a "significant shift in public opinion" on the balance between security and civil liberties following last month's disclosures from Edward Snowden.

The sit-in was a change of tactics for Restore the Fourth, which previously organized anti-NSA rallies that took place in over 100 US cities on July 4th. Unlike those previous actions, where organizers instructed participants to not engage in "civil disobedience," members of Restore the Fourth said they would not leave the Congressman's office until their demands were met, and broadcasted the event on Ustream while taking questions on Reddit.

The group says its next rally will be held on August 4th as part of "1984 Day" in New York City's Bryant Park.

Update [3:50pm]: Rep. Meeks has delayed his flight to Washington, DC and is now meeting with members of Restore the Fourth.

Update [5:15pm]: It looks like Restore the Fourth at least got the discussion they wanted. The group has decided to leave Rep. Meeks office after an "intense 20-minute debate," and should be posting a video of their meeting shortly.

"I do not believe we've had a violation of the Fourth Amendment as interpreted by the courts thus far," said Rep. Meeks during his meeting with the Reddit-based group this afternoon. He emphasized the importance of the FISA courts which issue the recurring surveillance orders, but wouldn't comment specifically on whether he believes the process comports with the text of the Fourth Amendment, which requires a warrant to specify the persons or places to be searched, and the things to be seized.

Read more: Everything You Need to Know About PRISM