In search of top talent from around the globe, tech's elite are displacing American workers, say programmers

When the Senate passed its new immigration reform bill last week, Mark Zuckerberg took to his Facebook page to celebrate. "A lot of work remains before reform becomes law but today's vote shows that politicians from across the spectrum can come together to vote for reform that will move our economy forward and honor our history as a nation of immigrants," he wrote. Zuckerberg included a link to FWD.us, the political action committee he created to help push immigration reform, which exhorted readers to "join the tech community in passing immigration reform."

"The workers are being completely ignored."

As it turns out, the tech community is anything but united on this issue. And the push for new reforms has highlighted the divide between Silicon Valley elite who want access to talent and middle class American IT workers who feel threatened by foreign competition.

"What is happening is that the people who run this industry are getting everything they want, and the workers are being completely ignored," said Kim Berry, president of the Programmer’s Guild. "American workers are being passed over in favor of foreign workers who make far less money, and politicians seem oblivious to our plight."

The controversy centers on the push by FWD.us and major tech firms for legislation that would expand the number of H-1B visas available. Created in 1990, the H-1B program allows US companies to hire people from other countries to work in America temporarily, particularly if the workers are "highly skilled" in subjects like science, technology, engineering and math (STEM). The program also allows workers to pursue a green card for permanent residence.

The current immigration reform bill, which has passed the Senate and moved to the House, would expand the annual cap on H-1B visas from 85,000 all the way up to 180,000.

Along with paying these foreign workers less, says Berry, tech companies believe they can get more out of them. "If a company is holding the reins to the process of getting a green card, and they ask them to come in on the weekends, what do you think they’re going to say? These tech companies want people who will work 80 hours a week without complaining. It’s basically a form of indentured servitude." 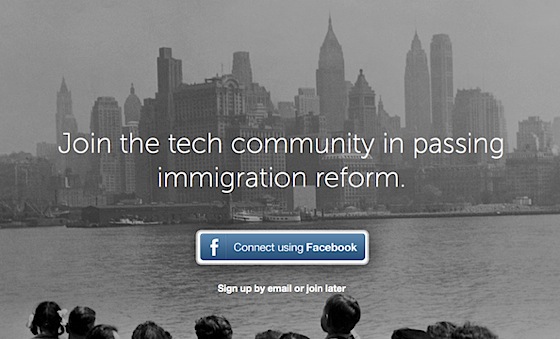 FWD.us is backed by luminaries from tech companies like Facebook, Microsoft, Google, Netflix, and Dropbox. They claim that with their industry booming, there just aren’t enough Americans with these skills to fill the current demand for STEM jobs. "Failing to match the supply of H-1B visas to the demands of today’s economy weakens, in real numbers, the economy’s ability to create jobs," said Brad Smith, Microsoft’s vice president of legal and corporate affairs, testifying before a Senate committee in April. He has a point: this year, the number of H-1B visa applicants quickly exceeded the 85,000 technical limit.

But the claim that tech companies can’t find enough qualified US candidates to hire, and need more foreign workers to fill positions instead, is hotly contested. "Four hundred thousand American graduate with STEM degrees every year," says Kim Berry, citing figures from the US Department of Education circa 2008 and 2009 , the latest years for which data is available online. "We don’t have a shortage of native workers. We have an industry looking to cut costs."

Recruiters in Silicon Valley say claims that H-1B visa workers are paid less aren’t true. "The skill sets that top tech companies want are so in demand, a foreign national is going to get 10 offers and competitive salaries," says Shannon Callahan, the head of technical recruiting at the venture capital firm Andreessen Horowitz. "People here on an H-1B visa usually make above prevailing wage, the same as an American citizen."

"We don’t have a shortage of native workers. We have an industry looking to cut costs."

Callahan says that there may be a surplus of American IT workers looking for employment, but that’s because their skills don’t match up with today’s marketplace. "A lot of folks looking for work are older professionals. As the infrastructure of tech companies increasingly moves to the cloud, these positions have dried up. You don’t need a big IT staff to get a company to global scale anymore."

Foreign workers in Silicon Valley, says Callahan, are far from indentured servants. "It used to be, once you started your green card process, you had to stay with the company that was employing you. Now, once you get through the first stage of applying for a green card, you can move around. So their salaries and working conditions have to be competitive." Since 2000, workers have been able to change jobs during the green card process, although the move is widely seen as risky and complex.

The hard data available on worker pay is conflicting, as are studies that examine whether there is a shortage of American-born STEM workers. A study from The Brookings Institute found that H-1B visa holders working in the tech industry earned an average of 26 percent more than their American counterparts.

Wages in the IT sector have stagnatedA separate study from a group of university professors writing for the Economic Policy Institute reached very different conclusions. It stated that H-1B workers may be filing as many as half of all new IT jobs in the US each year and that only one of every two American STEM graduates will be hired into an available position. The current immigration policies, the study concludes, will discourage US students from going into the STEM field, especially IT. And wages, says the paper, have stagnated over the last 14 years, in large part due to the influx of foreign labor.

How can both of these things be true at the same time? The answer reflects a larger trend in the American labor market: an increasing gap between the top earners and everyone else. In Silicon Valley, elite programmers are in high demand, fought over by employers who pay six- and seven-figure salaries on top of generous stock grants. It's understandable that these companies would spend money lobbying Washington for more access to premier talent.

The largest employer of H-1B workers are outsourcing firmsBut in the broader IT market, the environment is more like manufacturing, with less-skilled Americans being replaced by cheaper foreign labor. The largest employers of H1-B workers aren’t firms like Facebook and Microsoft, they are actually outsourcing companies like Infosys, Tata, and Wipro. These companies account for around half of the annual H-1B workers, and the majority of their employees are overseas, according to a recent report from Computerworld. The study found that less than three percent of H-1B workers apply for permanent residency. Most learn the job, then leave to continue the job from their home country.

"As a self-described bleeding heart liberal, this issue is really tough for me," says Morgan Missen, one of Silicon Valley’s top tech recruiters, who worked to find engineers for Google, Twitter, and Foursquare and now runs her own talent agency. "For the people who live in the bubble of the Valley, and consider themselves politically engaged, there is a lot of cognitive dissonance around immigration."

Morgan says that the foreign nationals she recruits are being paid just as well as their American counterparts. "But once you get away from the top-tier engineers, I think that there are a lot of temporary foreign workers who are being exploited, and who are putting the squeeze on Americans," says Missen. "When it comes to immigration reform, the tech middle class is not being represented, and they are losing out."

Additional reporting for this piece by Carl Franzen.