Why did Apple hire a Paris fashion executive?

Why did Apple hire a Paris fashion executive?

The worlds of high tech and high fashion collided on Tuesday, when Apple announced the hiring of Paul Deneve, former CEO and president of the iconic Yves Saint Laurent luxury brand. Deneve, 52, will serve as vice president of "special projects" at Apple, reporting directly to company CEO Tim Cook.

At this point, the precise scope and nature of his role at Apple remains unclear. Yet despite his vast experience in marketing and luxury sales, Deneve reportedly won't be replacing former retail chief John Browett, whose position remains vacant.

That begs an obvious question: If Apple doesn't want a high-powered fashion executive to take over its retail operations, what does it want from Deneve? Could he play a role in marketing the company’s rumored iWatch or other wearables, as many have speculated? Deneve's career path, coupled with Apple's potential roadmap, may offer some clues.

The transition from haute couture to Silicon Valley may seem dramatic at first glance, but in Deneve's case, it marks a homecoming. The business-educated Belgian worked in sales and marketing at Apple Europe from 1990 to 1997, following stints at ExxonMobil and Oriflame International, a cosmetics company, during the mid-1980s.

Deneve's career took a sharp turn in 1997, when he had what he would later describe as an "overwhelming" conversation with Coqueline Courrèges, designer and co-founder of the Courrèges fashion house. Fascinated by her aesthetic and futuristic vision — Courrèges designs electric cars in addition to high-end clothes — Deneve decided to embark on a career in the fashion business, joining Courrèges as a managing director.

Thus began a nearly two-decade traipse through some of Paris' most prominent fashion companies. He served as CEO of Nina Ricci from 2003 to 2005, before leaving to take over as president of Lanvin in 2006. He departed for the Bay Area in 2009 to pursue a masters degree in management at Stanford University, and joined YSL two years later, replacing outgoing CEO Valérie Hermann.

Deneve has ruffled some feathers along the course of his career, having left his position at Lanvin in 2009 over "diverging points of view" on the company’s strategy. At YSL, though, his tenure was largely successful. In his two years there, Deneve oversaw what he described as a "complete overhaul" of the venerated brand, spearheaded by creative director Hedi Slimane — the eccentric former Dior designer who popularized skinny men's suits a decade earlier.

Promoting Slimane to creative director in 2012 has been Deneve's boldest move in the fashion world. It was Slimane who made the controversial decision to drop the "Yves" from the company's ready-to-wear line, and to introduce a new logo on its packaging. Deneve also put him in charge of YSL's retail expansion, tasking Slimane with designing the 15 new stores that the company plans to open across the globe every year.

YSL's first collections under Slimane — grunge-inspired womenswear and boho-chic floppy hats — were greeted with negativity and confusion from critics, but Deneve remained fiercely loyal to his creative director. Following a particularly controversial Paris show last October, the CEO penned an open letter to fashion magazine WWD, lashing out at the publication for running what he described as a biased and misrepresentative critique. 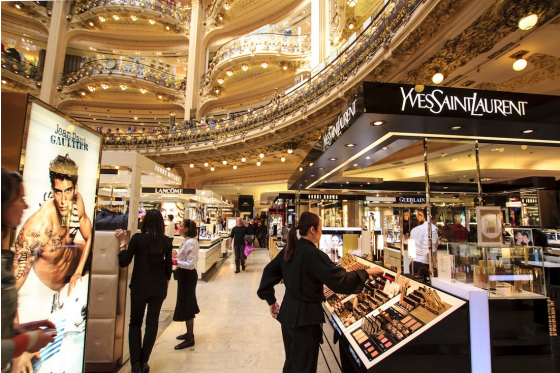 Deneve has also shown that he's not afraid of pushing into new demographics, even for a brand as institutional and revered as Saint Laurent. In addition to YSL's retail expansion, the executive stressed the importance of offering products across wider price ranges, in an attempt to attract "new, younger clients."

Now that he's returning to Silicon Valley, questions are swirling as to how Deneve's fashion expertise could dovetail with Apple's strategy. His grandiose plans to "revolutionize" the YSL brand echo the philosophy that late CEO Steve Jobs instilled at Cupertino, though Deneve likely won’t have the same power to shift Apple's tectonic plates the way he did Saint Laurent's.

What does this mean for Apple's iWatch?

There has been widespread speculation that Deneve may be involved with the wearable technologies that Apple is rumored to be developing. Given Deneve’s experience in the fashion world and Apple’s history of hiring outside specialists — the company brought on Yale School of Management dean Joel Podolny to helm the Apple University initiative in 2008 — it's not an inconceivable theory.

Apple has also openly expressed interest in developing wearable technologies. Cook has described the market as a "profound" opportunity for Apple, and sources told The Verge in March that the company plans to release a wristwatch running iOS by the end of this year.

But that initiative is being led by designer Jony Ive, sources say, and it's not immediately clear how Deneve would fit into its power structure. Deneve, after all, is not a designer or a developer, and Apple likely wouldn't bring on a former CEO to oversee a small product team.

"it will never work out if they don't have a shared vision."

What Deneve does bring to the table is a proven ability to market to high-end consumers, and, perhaps more importantly, to hire creatives capable of executing a particular vision. YSL's revamp may be driven by Slimane's aesthetic, but it's been underwritten by Deneve's unwavering commitment to, and trust in, his designers.

"Fashion CEOs have to have business acumen, of course, but they really have to know how to pick talent, and how to apply that talent," says a design assistant at a Paris luxury fashion brand, who spoke to The Verge on condition of anonymity. "The rest is up to the designer, but it will never work out if they — the designer and the CEO — don't have a shared vision."