The world is getting warmer, but are natural disasters getting worse?

Share All sharing options for: The world is getting warmer, but are natural disasters getting worse?

Evidence of climate change has been coming at a steady pace for years. NASA has said that the 10 hottest years on record all occurred since 1998, and carbon dioxide levels — cited the force behind global warming — hit a record high in May. Now, a UN report has compiled data for the past 10 years, calling the period from 2001 to 2010 "a decade of extremes."

The report gives us a broad, high-level look at what many already expected: that average temperatures are getting warmer and creating extremes in weather, though it may be too early to tell how this is shaping disasters like hurricanes or floods. "The period 2001 - 2010 was the warmest decade on record since modern meteorological records began around the year 1850," says the report. It's continued a trend of consistently warming decades. Between 1971 and 2010, the global temperature increased an average of 0.17 degrees Celsius, compared to an overall average of 0.062 degrees for 1880 through 2010. The jump between decades was also more pronounced: average temperatures increased 0.21 degrees Celsius between the decade starting in 1991 and the one starting in 2001, larger than the increase between any two known decades. 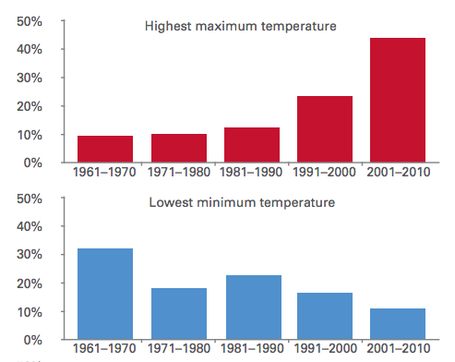 The report notes that average temperatures can naturally vary year by year, but it painted a trend of hot spells that are increasingly hot and cold spells that aren't as cold. The chart above shows what percent of countries reported their hottest and coldest temperatures in a given decade, according to a World Meteorological Organization survey. There are hints, as well, that rain could be increasing. 2010 is cited as "the wettest year ever recorded" worldwide, and the decade's precipitation rate rose above the average of the preceding 50 years, though it didn't reach the levels seen in the 1950s.

Climate change has often been tied to extreme weather events like hurricanes, but the overall picture remains murky. The UN report found that some severe weather events seemed to be getting more common. The North Atlantic Basin, which gestates storms that strike the American east coast, saw the most active tropical cyclone season since 1855, with an average of 15 named storms per year. But elsewhere, cyclone activity was either average or below average, though storms could still cause devastating property damage and loss of life.

It's often difficult to tie individual events like floods or droughts to the larger climate, though the report says that logically it's likely we could see an increase in both. The UN also cautioned against taking loss of life or property as a proxy for a disaster's severity. "Other factors come into play, notably the increased exposure of people and property to climate extremes and the improved and increased reporting of disasters." That said, deaths from heat waves increased 2,000 percent in the past decade, though deaths from storms and floods decreased by 16 percent and 43 percent respectively, "thanks, in good part, to better early warning systems and increased preparedness." Heat wave deaths were practically nonexistent in the 1990s, however, and storm deaths still outnumbered them after the turn of the century.

The UN report doesn't dispute the basic, accepted facts of climate change: Arctic ice is receding, and as it does, we're likely to see both rising sea levels and potentially even higher levels of carbon dioxide and methane, which will itself accelerate changes. But it said that we still need a more complete picture of exactly what's going on right now. "A decade is the minimum possible timeframe for detecting temperature changes," the report says. "Assessing trends in extreme weather and climate events requires an even longer timeframe because, by definition, these events do not occur frequently."