Share All sharing options for: If Shakespeare wrote 'Star Wars'

A long time ago, in Elizabethan England, a playwright named William Shakespeare wrote an epic space opera about a fierce battle between good and evil taking place in a galaxy far, far, away. Okay no, Shakespeare did not write the Star Wars trilogy — but imagine if he had. That's the premise behind Ian Doescher's new book, William Shakespeare's Star Wars, which translates the entirety of A New Hope into iambic pentameter and other Shakespearean prose. "Pray, R2-D2, where art thou?" asks C-3PO in the early pages. "Fairer necks than thine my hand hath crush’d," Vader warns Leia. 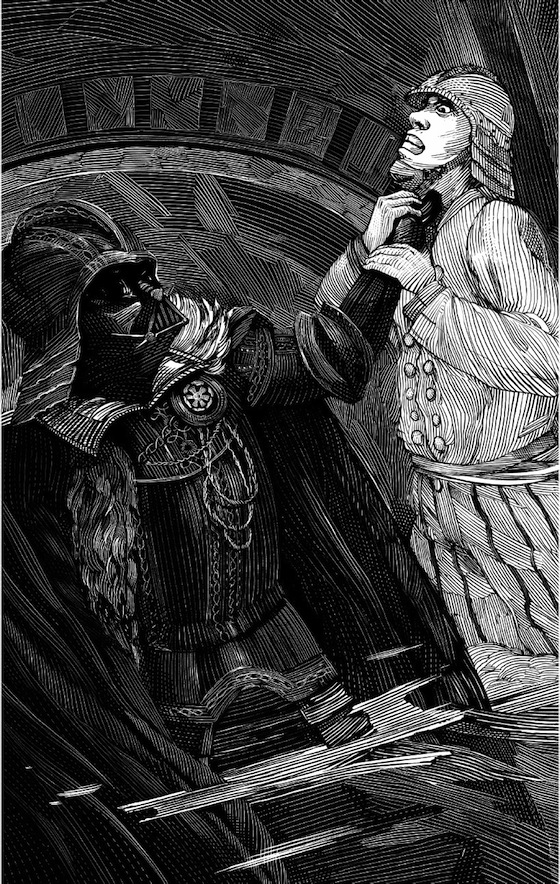 The novel also contains beautiful old English woodcut-style illustrations. It's published by Quirk Books, the company behind the other hit remixed classic Pride, Prejudice and Zombies. See and read for yourself in a free excerpt published this week by Boing Boing, and if you feel the force is strong with this one, you can buy the full version on Amazon ($9.99 for Kindle edition, $11.34 hardcover). There's also a campy trailer for the book on YouTube.

Doescher said in a recent Q&A that he would be interested in continuing the series with The Empire Striketh Back and The Jedi Doth Return. Perhaps at some point he could take a look at the prequels, too — we're fairly certain that Jar Jar Binks would not have made into the series if the Bard of Avon had anything to say about it, or at least, there would have been a much more entertaining version of the character.