Government classifying less new information than ever, but it's hardly making a dent

Share All sharing options for: Government classifying less new information than ever, but it's hardly making a dent

In the wake of WikiLeaks and the Bradley Manning case, the US government’s penchant for locking away seemingly mundane information by declaring it classified has been roundly criticized by activists and concerned citizens pushing for more transparency. But with the release of this year’s Information Security Oversight Office report to the president, it appears that the wheels are at least turning in the direction of openness. In fiscal 2012, the total number of "original classification" decisions — that is, new determinations by White House and defense officials that something ought to be classified — fell over 40 percent from the previous year, to 73,477. The oversight office notes that costs also fell by $1.66 billion, or 13 percent of all the money spent on classifying information. 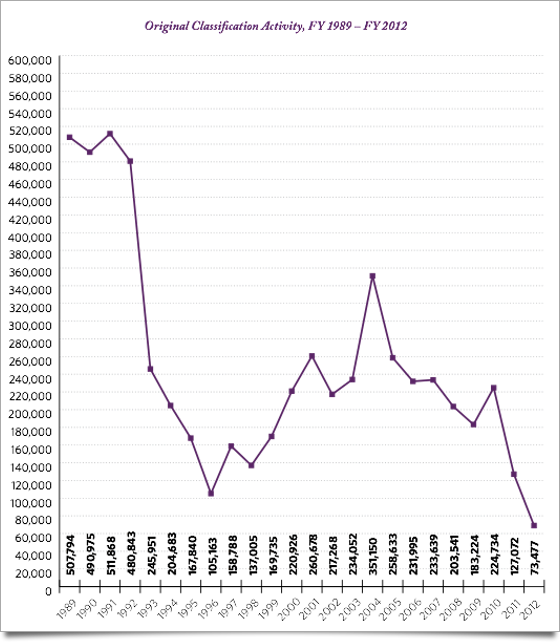 The drop in original classification becomes a tiny rounding error

But that decrease is far from the full picture. "Derivative classification" is used to shield information related to something else that’s already been classified, and this justification was used to classify information in over 95 million instances in 2012. By that token, the drop in original classification becomes a tiny rounding error. Nevertheless, because every derivative classification has to be traced back to some original classification decision, the reduction is likely to have far-reaching effects down the road. It’s also worth noting that the government declassified more than half of the pages it reviewed last year under mandatory declassification requests — similar to Freedom of Information Act requests, but without the option to sue in court if the application is denied. 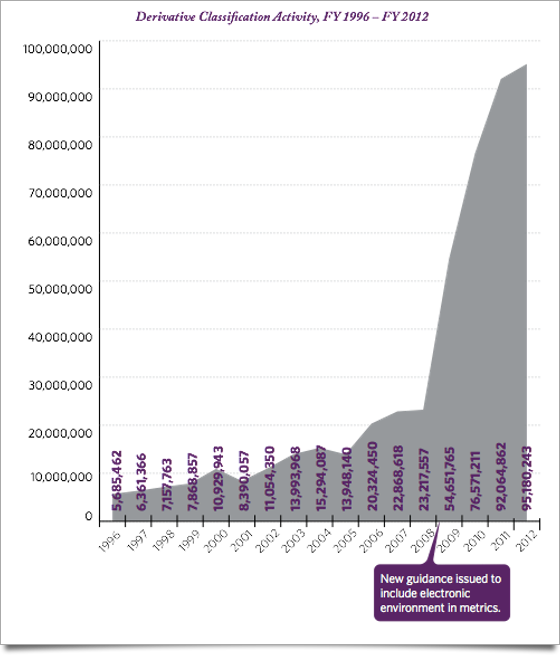 In 2009, President Obama issued an executive order aiming to reduce the amount of new information that gets classified and release old material sooner. But while the president is pushing to fulfill campaign promises of transparency, last month’s revelations of widespread NSA spying have rekindled an intense debate on the issue of openness, both on the streets and in the capitol. In order to get the discussion moving, 16 members of Congress filed a brief with the secret Foreign Intelligence Surveillance Court earlier this week to release its rulings providing the legal justification for initiatives like the NSA's telephone metadata surveillance program.