Share All sharing options for: 'Billion-pixel' imaging system built with a standard microscope and $200 LED array

Researchers at the California Institute of Technology have discovered a way to improve conventional microscope imagery in a pretty massive way. Using an inexpensive LED array, the CalTech scientists were able to boost the resolution of a microscope with a standard 2X lens to a significantly higher 20X, an advance that help digital pathologists studying large number of tissue samples. The study, which was just published in Nature Photonics, shows how the CalTech team worked around one of the microscope's main limitations: either having to choose between a high resolution image with a small field of view, or a lower-resolution image with a wide field of view. However, by pairing an LED array with the standard 2X lens microscope, shooting 150 low-resolution images of a sample (one for each LED), and using a computer to stitch everything together, the resulting image is free of the typical compromises.

"We found a way to actually have the best of both worlds," said Guoan Zheng, lead author of the study. "We used a computational approach to bypass the limitations of the optics." The study shows that the new microscope captures about 100 times the information as compared with the standard setup — the researchers called it a "billion-pixel" imaging system. And while all this increased resolution comes at a cost, it's a fairly affordable upgrade — the LED array only costs about $200 to implement. The CalTech team believes that the new system (called "Fourier ptychographic microscopy) will not only offer more detailed images but also speed up some traditional processes — typical digital pathology scans can take "tens of minutes" while the FPM system can take the same image all in one shot. You can see an example of the improved results in the photo below — as well as the prototypes colorful Lego mount, something we imagine will be swapped out for something more professional if the FPM system takes off. 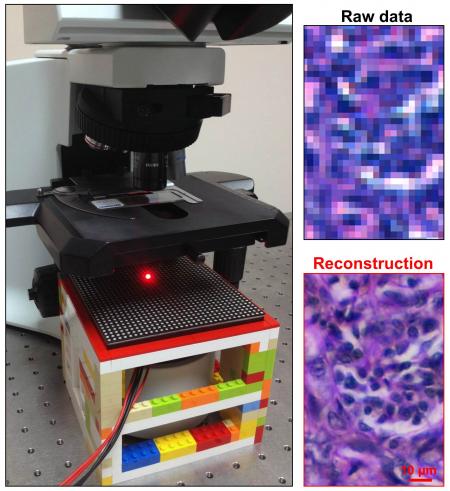