'X-Men: Days of Future Past' site shows off robotic Sentinels and a very '70s Peter Dinklage

'X-Men: Days of Future Past' site shows off robotic Sentinels and a very '70s Peter Dinklage

Long ago, there was a time when not every science fictional company was granted its own in-universe web site. Well, those years are long expired, and X-Men: Days of Future Past is introducing us to Trask Industries, a friendly genetics company that will protect your children by crushing the congenitally ill under massive robot fists. Trask's site doesn't quite capture the sinister utopianism of Ridley Scott's in-world Prometheus ads, but it offers plenty of clever nods at the plot of Days of Future Past, including footage of Peter Dinklage as the company's founder and an in-depth explanation of the company's anti-mutant "genetic security" devices. 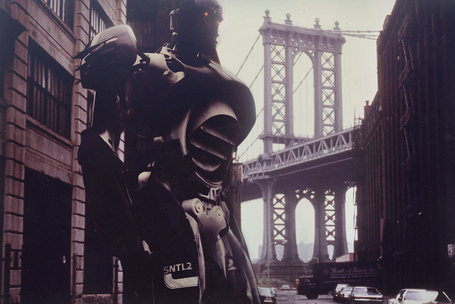 As a piece of world-building, it's highly competent: prepare to get whisked through fifty years of R&D and alternate history, with Sentinel robots protecting Ronald Reagan during his inauguration and striding in front of the Manhattan Bridge. As a site, it's slick and well-produced, leaning on the "Snow Fall"-style multimedia tricks that have gained traction in the past year. The contrast between euphemistic benevolence and "Mutants are the Enemy!" propaganda posters is a little hard to swallow, but given the creative ways X-Men has blended fantasy and social commentary in past installments, we're willing to give the series the benefit of the doubt for now.