Dialogue controls your smartphone from your Mac, lets you make and record phone calls

Share All sharing options for: Dialogue controls your smartphone from your Mac, lets you make and record phone calls

As Apple continues to refine its mobile and desktop operating systems, the company has slowly integrated messaging and other mobile-centric features into Mac OS. With an Apple ID, Mac and iOS owners can send and receive Messages and also make FaceTime video calls, but traditional phone call support has been limited to third-party apps like Skype.

Dialogue aims to fill that gap, letting you operate your smartphone by tethering it to your Mac via Bluetooth. Compatible with most smartphones, Dialogue sits in your Mac's menubar and silently waits to direct phone calls from your handset to your desktop. It also allows you to make outgoing calls without the need to touch the device. Right now, the app pairs contact names and numbers with Mac OS Contacts, but developer Zebraa says it will look into the possibility of incorporating contact synchronization via Bluetooth.

Compatible with most Apple, Android, and Windows Phone devices

Aesthetically, Dialogue feels like an Apple app, utilizing familiar red and green buttons to accept or hang up calls. When you establish a call (both incoming or outgoing), Dialogue offers the option to record your interaction, saving it locally for you to play back. If you make a lot of calls and often need to save them for transcription, this app could prove a worthy tool in your arsenal.

For the best call quality, Zebraa recommends using headphones with a built-in microphone. When we tried using a Mac's default microphone and speakers, call quality suffered on both ends, making us scramble for the closest pair of headphones. 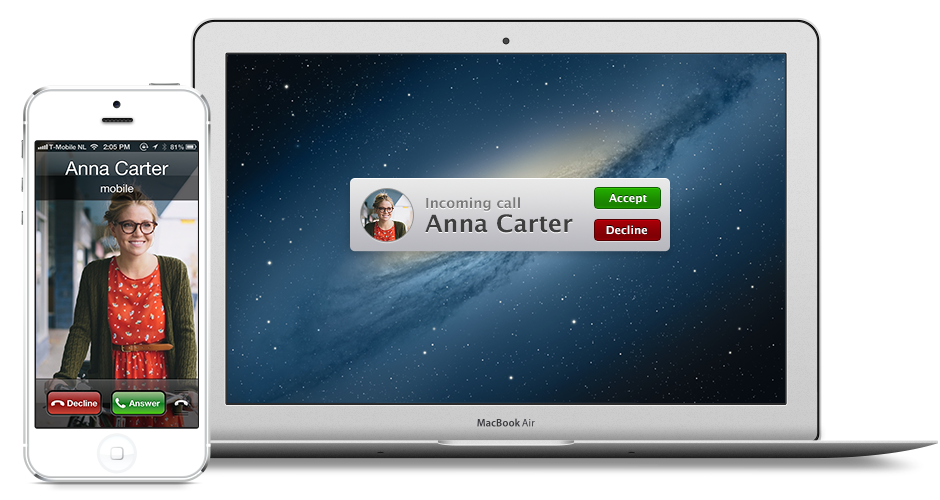 At version 1.0.1, Dialogue isn't without its faults. In our tests, we noticed that the receiver of a call would often hear an echo of their voice when they spoke. There are also small issues with the use of the Mac's built-in contacts, meaning you will have to first synchronize your contacts to the desktop, which is less of a problem if you use iCloud. We noticed that if an unrecognized number has dialled you, the app will show it is from an 'Unknown' caller and does not display their number on your desktop (although it will still display on your smartphone). Zebraa says it is aware of the issues and hopes to fix them in an upcoming update.

At version 1.0.1, Dialogue isn't without its faults

In the future, Dialogue is set to gain a number of new features. Zebraa vows to include better contact support and will soon include URL schemas, allowing users to integrate it within tools like Alfred and make calls using simple keyboard combinations. On a similar note, built-in keyboard shortcuts will also come to the app, as will browser integration. In our tests, we successfully paired Apple, Android, and Windows Phone smartphones with Dialogue, with Microsoft's 'Read incoming text messages aloud' feature routing unexpected but welcome voice prompts to the desktop as we received them. Dialogue is available now on the Mac App Store for $6.99 / €5.99 / £4.99.