In a timely appearance, National Security Agency director General Keith Alexander took the stage today at the Black Hat security conference in Las Vegas hoping to "put the facts on the table" about recent revelations regarding his agency's various surveillance programs.

"This is perhaps one of the biggest issues facing our country today," said Alexander, claiming that he would "answer every question to the fullest extent possible." But the talk served largely as an overview of what we've already learned about the NSA's programs following disclosures from Edward Snowden. Alexander defended the agency by repeating that the metadata program which collects the phone records of all Verizon customers does not collect the content of communications, and that only 35 NSA analysts are allowed to run queries against the database.

"This is perhaps one of the biggest issues facing our country today."

One slide in the presentation revealed a screenshot of that database, showing fields for the time and duration of the call, the phone numbers of the participants, and the origin of the data — in this case the "business records" provision of the Patriot Act. He claimed the program helps the NSA "connect the dots in the least intrusive way that we can," and that separate content collection programs like PRISM have helped the US and its allies "disrupt and understand 54 terror-related activities." 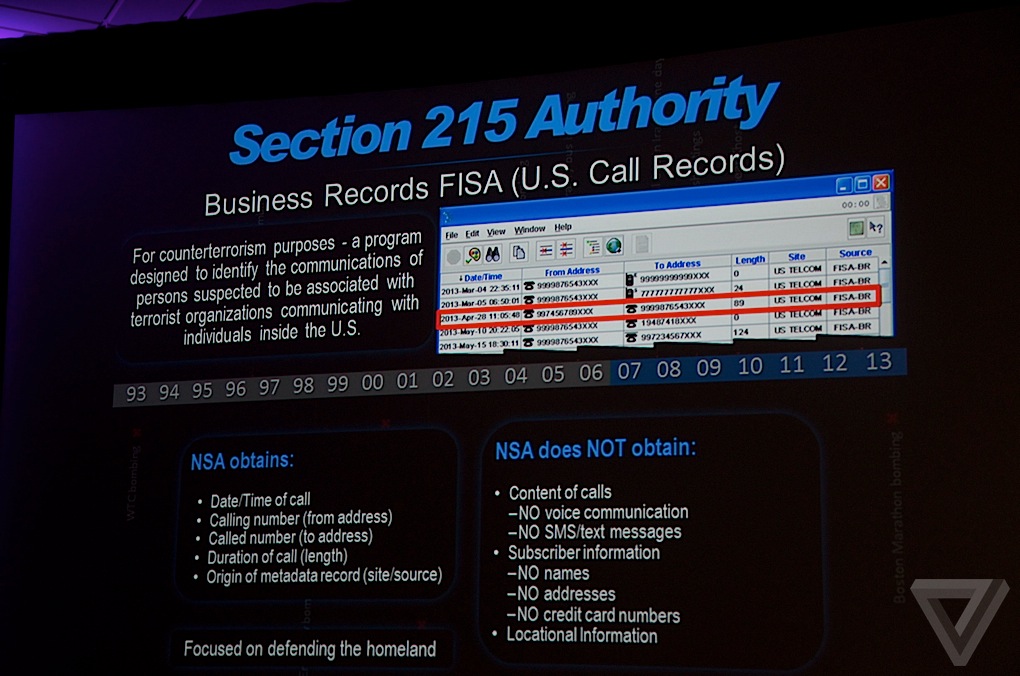 The room had a tense atmosphere as the general gave his keynote, the second he's delivered at a major security conference in Las Vegas. Last year he was dressed down in a t-shirt and jeans, giving a recruitment speech at Black Hat's sister conference, Def Con, where he received a healthy dose of heckling.

"If you disagree with what we’re doing then you should help twice as much."

Today's keynote received a similar response. Before the speech had even begun, security guards confiscated a carton of eggs that was being passed around by the audience. When Alexander began speaking about what the NSA is trying to protect, someone in the crowd shouted "Freedom!"

"Bullshit!" another heckler retorted. Later, Alexander opined that terrorists are attacking the United States because they wanted to impose Sharia law and see the country as a threat. "They want to attack us 'cause we're bombing them!" said another audience member.

But unlike at Def Con, much of the suit-and-tie crowd at Black Hat seemed sympathetic to Alexander as he calmly responded to the random critics. Toward the end of the speech, another heckler yelled at him to "read the constitution," to which he replied, "I have. You should too." Portions of the large convention hall, which included scores of federal agents, erupted in raucous applause.

"You're the greatest gathering of tech talent anywhere in the world," Alexander said to the audience, saying that the NSA's critics should help them "come up with a better solution" for defending the country while preserving civil liberties and privacy. "The whole reason I came here was to ask you to help us to make it better, and if you disagree with what we’re doing then you should help twice as much."