How do fireworks work?

Centuries-old technology with a modern twist

Share All sharing options for: How do fireworks work?

The first firework was pretty basic. A Chinese monk named Li Tian took a piece of bamboo, stuffed it with gunpowder, and threw it into a fire, producing a bang loud enough to scare away ghosts. That was more than 1,000 years ago, but fireworks today are much the same: a shell, an explosive, and a fuse.

The biggest changes in modern firework technology were driven by the demand for extravagant, sparkly displays on days such as the Fourth of July. American display fireworks tend to emphasize color in addition to sound, and audiences seem to prefer that the fireworks explode in the sky rather than on the ground.

Colors were incorporated into fireworks during the Italian Renaissance, when steel and charcoal were added to produce yellow and orange. Gradually, pyrotechnicians experimented with different metals that absorb energy from the explosions and emit color. Strontium compounds give us red, barium gives us green, and copper gives us blue. Combinations of these and other metals produce the range of colors you see in a professional fireworks display.

Fireworks today are much the same: a shell, an explosive, and a fuse

To get the fireworks airborne, pyrotechnicians rely on a chain of two explosions. They load the firework into a "mortar," a tube that is essentially a cannon. Taking care not to light the firework itself, they spark a fast-burning fuse that ignites the gunpowder, packed in a separate compartment at the bottom of the firework. The package shoots into the sky.

So what’s actually in that package? Let’s look at an aerial shell, a common type of firework that illustrates the principles well. Imagine an outer shell, typically made of plastic or paper, holding everything together. Inside the shell is gunpowder, and embedded throughout the gunpowder are explosive spheres called "stars," which become the points of light we see in a firework. Stars can be coated with layers of different colorizing metals, so that the light changes color as each star burns.

Another fuse, known as a "time delay fuse," runs through the firework. This fuse ignites at the same time as the fast-burning fuse, but it takes longer to reach the gunpowder and stars inside the firework. The length of the time-delay fuse is carefully calculated so that the firework does not ignite until it has reached a certain altitude.

"Stars" are the points of light in a firework

More complex firework action can be achieved by stringing fuses together and building chambers of gunpowder in the firework. A "cake" or "repeater" — one common type of firework — is made from a group of aerial shells that produce a series of light, color, and sound explosions.

"Pattern shells," which rely on time-delay fuses within the firework and other techniques, can cause the stars to explode in recognizable, albeit often lopsided, shapes. 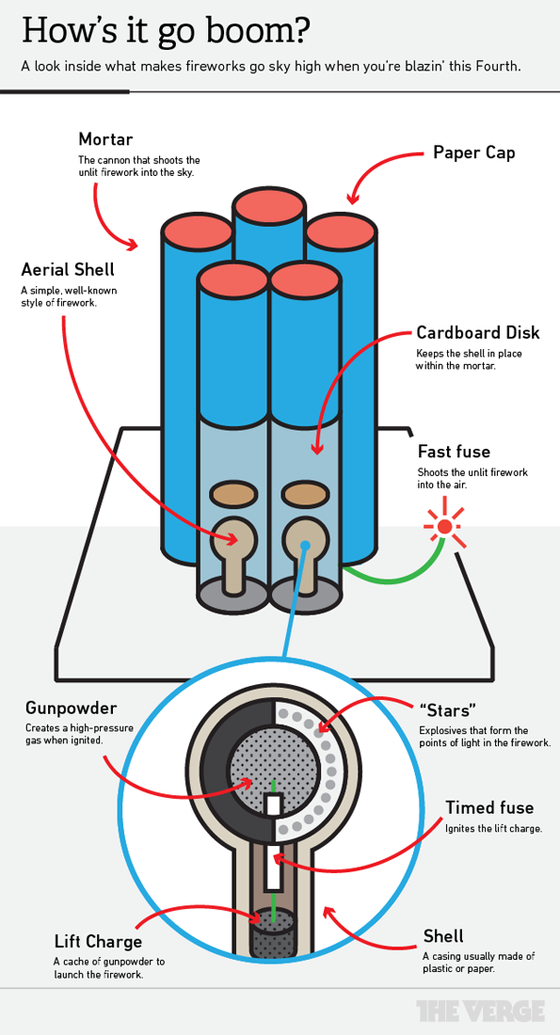 Firework technology continues to evolve. Some fireworks designers are also starting to use compressed air instead of gunpowder, which is considered safer and allows for greater precision. Ongoing research looks to make the process more environmentally friendly by using different ingredients. Some firework chemicals, especially the heavy metals used to produce colors, can be carcinogenic or toxic to humans and animals when absorbed into the soil, dispersed through the air, and scattered over rivers. Still, the core process is the same as it was in the seventh century. But no, that doesn’t mean you should try it at home.