Earlier this week Canon announced the EOS 70D, its answer to Nikon's recently released D7100. The 70D makes big bets on usability features — such as built-in Wi-Fi and touchscreen controls — to help set it apart. But it isn't just Nikon that the 70D is competing with. With it getting harder and harder to tell Canon's own mid-range cameras apart, does the 70D change enough to stand out?

In Canon’s own lineup, the 70D sits above the consumer-grade Rebel T5i and beneath the prosumer-focused 7D. All three cameras have the same APS-C sensor size, but their strengths are varied: The T5i comes in at a much lower cost but at the expense of speed and handling. And the 7D has a higher build quality and features for pros, but at nearly four years old, could be nearing the end of its lifespan. 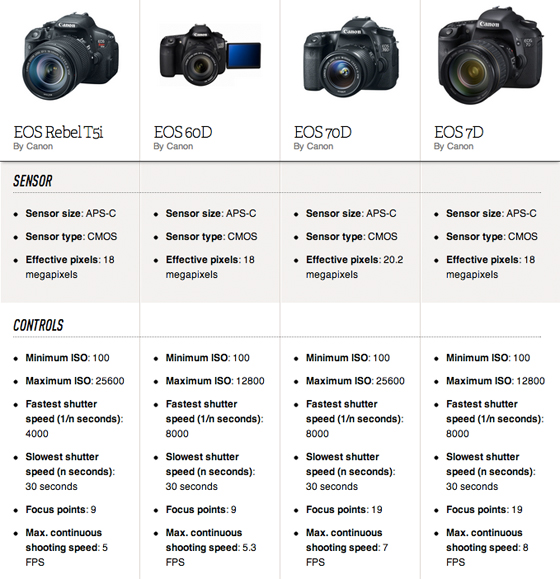 The T5i still remains a smaller and lighter camera than the 70D, but the 70D has added some of its best features and more. The Rebel series’ touchscreen controls have come over to the 70D, along with new DLNA and NFC connectivity options that should enable new ways to wirelessly view photos and interact with the camera. But it’s the 70D’s "Dual Pixel CMOS autofocus" — a phase detection autofocus system for shooting while a live preview is shown on the camera's display — that might stand out the most. Canon says the brand new autofocus should make focusing while displaying a live preview much smoother, achieving perfect focus on the camera's very first try. That could make a big difference for filmmakers too, for whom autofocus systems have never quite worked because of focusing troubles.

On the higher end, the 7D remains set apart by a number of pro-focused features, including a magnesium alloy body and a viewfinder with full coverage. But Canon's other prosumer cameras have had plenty of time to catch up to it. The 70D has the same number of focus points for phase detection AF, it’s almost caught up to the 7D on continuous shooting speed (reaching seven frames per second, rather than eight), and its wealth of connectivity features mean that controlling the camera remotely should be much simpler.

Those same strengths make the 70D a more capable camera than its predecessor, the EOS 60D. The 60D has just under half as many autofocus points as the 70D — only nine, like on the T5i — and is lacking the touchscreen now found on the models surrounding it. 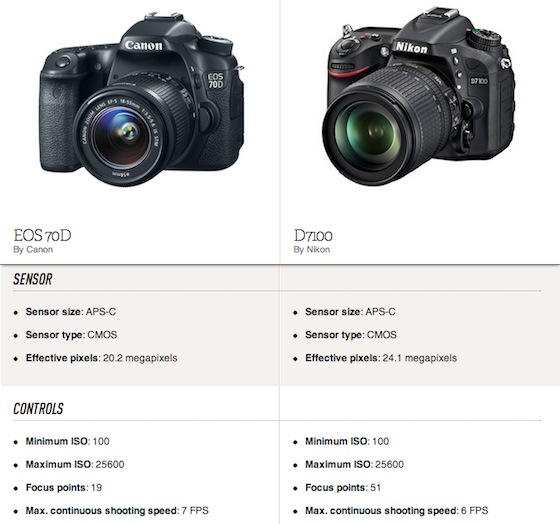 Of course if you aren’t locked into Canon’s lens system, the choice is much different. With the same price and a focus on the very same market, Nikon’s recently released D7100 makes for a strong competitor on paper. For the pro, Nikon's camera is distinctly set apart by a full coverage viewfinder and dual memory card slots — that means capturing exactly what's shown in the viewfinder, and automatically creating a backup of photos the instant they're shot. While the 70D has improved upon the 60D’s viewfinder, it still only brings it up to 98 percent coverage of what the sensor actually captures, and neither camera can hold more than a single SD card.

Nikon's competition reaches for the pros

Where the D7100 falls behind is in autofocus. While shooting with a live image preview on the display, Nikon’s contrast detection autofocus likely won’t be able to keep up with Canon’s new Dual Pixel CMOS AF. It’s also missing the connectivity and touchscreen features that should make for more versatile ways to control the 70D. So while both cameras are shooting for the same prosumer market, those differences might just separate the cameras between dedicated pros and aspiring amateurs.

Most companies seem to have taken the holiday week off, but there were still a few other additions to the database this week:

If you want to learn more about any of the products mentioned above, all of our information on them can be found through the database box located beneath the article. For more on cameras, laptops, and just about every product around, you can check out the full Verge Database right here.