Nokia is preparing to unveil its 41-megapixel PureView Windows Phone on Thursday, codenamed EOS, and parts of the announcement are starting to leak. Russian newspaper Izvestia has received an image which is claimed to be a hybrid accessory case and charger for the "Nokia Lumia 1020." The snap on case appears to include a built-in 1020 mAh battery to charge Nokia's PureView device on the go.

Nokia's "EOS" Windows Phone previously passed through the FCC last month, and one document referred to a "camera grip" accessory. Izvestia claims this particular accessory improves the grip for one-handed use, and includes a camera shutter button, a socket for a tripod mount, and a microUSB connector for the charging element. It's not known whether this particular case will include support for wireless charging, as previous leaks of the Nokia EOS have shown the rear of the device with wireless charging connector points. 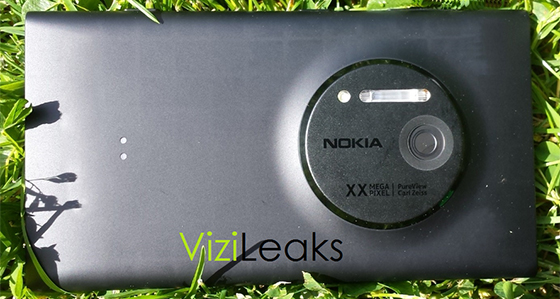 Nokia will introduce its 41-megapixel Windows Phone at a special event in New York on Thursday, and Nokia has been teasing "41 million reasons to zoom in." However, there's confusion over the final branding for the device. A press image for a "Lumia 1020" leaked in early July from the evleaks Twitter account, but shortly afterwards the same account identified it as a "Nokia 909" without the Lumia branding. When the Lumia 720 and 520 handsets leaked, they both had the time on the screen set to their model number. The time on the latest "Lumia 1020" leak is set to 10:00, indicating it's possible this is the Lumia 1000 or simply another name entirely. The Lumia 925 leak also had a time matching its model number, but it's not always the case as the Lumia 928 leak had an entirely different time displayed. We'll find out on Thursday, and The Verge will be bringing you live coverage of the event.

Update: Izvestia has posted some new pictures of the case, showing it off from new angles. The full set is available here, with a couple shown below.