Share All sharing options for: Russia hopes to have a floating nuclear power plant in operation by 2016

Russia has been hard at work on a floating nuclear power plant for years, but the project is finally getting closer to completion. According to RT.com, one of Russia's biggest shipbuilders revealed that the country's first floating nuclear power plant is expected to be in operation by 2016. While it might seem like a hazardous undertaking, the specifications of the floating reactors are such that they should be able to withstand tsunamis, crashes with other ships, or crashes with structures on land. The vessels are also said to not release any harmful or hazardous substances during operation. The benefit of these plants is their extreme portability — the floating power plants can be towed by other vessels out to remote areas where nuclear power is too expensive or too dangerous. Each plant should provide enough energy to power a city with up to 200,000 people. 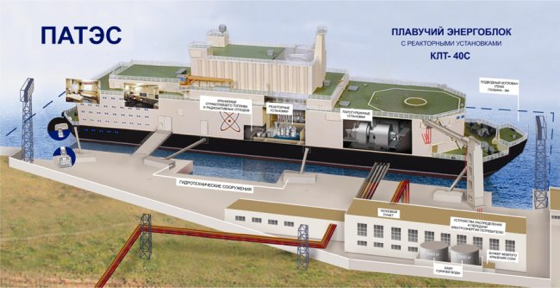 The power plants are even able to be used as a desalination plant, able to provide 240,000 cubic meters of fresh water on a daily basis. While there's a lot of potential usage for these mobile power plants, we imagine they'll need to pass some pretty stringent safety tests before being deployed — a meltdown in the middle of the ocean isn't a situation anyone wants. There's definitely a lot of interest in the project being successful though, from counties beyond Russia. Fifteen counties, including China, Argentina, Indonesia, and Malaysia, have expressed interest in using the technology for themselves.