As biological engineering becomes more and more adept, scientists will eventually get to explore the limits of what they can craft in the lab. To that end, designer Agatha Haines has put together a conceptual series of custom organs, which could one day be used by humans as an organic way to replace mechanical implants like pacemakers. The "Electrostabilis Cardium" — pictured above — would do just that by using traits from an electric eel to send out shocks at the first sign of a heart attack. Another concept imagines an organ that has been modified with glands from a leech, and can use the leech's saliva as an anticoagulant when it detects pressure from a blood clot. 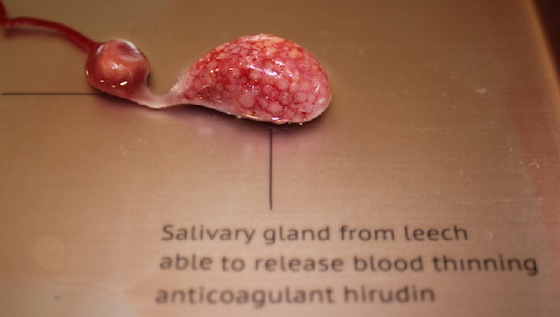 Haines told We Make Money Not Art that she wanted the hybrid organs to both resemble what animal they came from and to signify what effect they have on the body. "Whether people are more likely to accept these organs is something that I am trying to question through doing the project," Haines said. "I think if the organs are partly made from our own cells we may be more likely to accept them into our bodies." Her belief holds true biologically — not just psychologically. There's a great risk of transplanted organs being rejected by their new host, but biologically engineering an organ using a person's own cells could one day overcome that risk.