My keyboard tried to kill me: the overly complicated story of an ergonomics war

Or how I learned to chill and find personal alignment bliss

Share All sharing options for: My keyboard tried to kill me: the overly complicated story of an ergonomics war

tl;dr? No prob! Just scroll to the bottom.

All of a sudden I couldn’t bring myself to type anymore. It had been creeping up on me for years. I was taking a break in the middle of an editing marathon but this time when I sat down again I could hardly bear the discomfort of turning my palms down to face my laptop’s typing surface. When I tried to move my fingers to tap it felt like my muscles were bundles of dry and mangled rope being dragged across the splintery hull of an ancient vessel: not pain in the traditional sense but an extreme discomfort so distracting I could no longer focus on the screen. Like the victim of some sort of cruel joke I stared down at my deceivingly normal-looking hands: are you guys trying to kill me?

In a bizarre turn of events my MacBook, once a gleaming icon of white-plastic productivity, had devolved into my tormentor. The keys had absorbed massive amounts of finger oil, their screen-printed characters fading a little more every day in a lurid testament to the time I spent hammering away at them. My Gchat status constantly read “carpal” to ward off would-be chatters; you wanna talk first-world problems, man, I had plenty. My neck and back were also conspiring against me, screaming out at me to quit doing whatever the hell it was I was doing at the time and just lay the hell down.

Since my disability now threatened my laptop-based livelihood I did what any American would do and decided to sink a little cash into treating it. The “prosumer” solutions like Microsoft’s undulating Natural Keyboard hadn’t really done much for me, and the next step up was getting into distinctly niche-y territory. When one gets pulled into these consumer electronics pigeonholes, there’s often little evidence to separate fact from expensive fiction, so I did a little layman science to make sure I was getting my money’s worth.

The repetitive stress injuries I had were exacerbated by typing and mousing with my hands in a seriously unnatural position, with my palms down on a flat surface. From a product-design perspective a flat keyboard and trackpad make perfect sense but it turns out our bodies aren’t really into that 2D approach. Think about the way a fetus holds its arms, how we shake hands, and how your arms lay at your sides: palms up and down, more or less perpendicular to the floor. Every time you reach for a normal keyboard you turn the whole arm-hand system 90 degrees inward, torquing all the connected structures into a twisty nest of terror. If I wanted to escape the nest, I had to go 3D. I had to go vertical. I had to go...freestyle.

Enter the Kinesis Freestyle2, the heavyweight champion of ergonomic keyboarding. It’s a typical QWERTY affair, but snapped in two. With the optional Ascent Multi-Tent accessory you can anchor the free-floating halves in distinctly vertical territory, anywhere between 20 and 90 degrees away from the desk. At just over $300 this package wasn’t an easy pill to swallow but once it took up residence in my workstation I felt the difference immediately. Traditional keyboards enable quite a bit of sight-typing, which involves small neck and eye movements to see which key your fingers are on. That doesn’t fly with the Freestyle, where all the keys are essentially pointing away from your face. But after a week of vertical typing practice, my words per minute were back up to pre-injury levels.

After a week of vertical typing practice, my words per minute were back up to pre-injury levels

My mouse, still mired in the flatness of tradition, was getting jealous at this point. I decided to drop another wad of cash on the Evoluent VerticalMouse 4 (Small Edition), a $100 three-button pointing device that feels like the inside of a handshake. With its adjustable speed settings, perfectly calibrated scroll wheel, and built-in programmable thumb buttons, the official mouse of the University of California, Berkeley brings me joy every time I put my hand to it.

With $400 of human-input devices between my hands things got a lot better. The worst of my hand discomfort melted away and I was once again able to focus on meeting deadlines. But my neck and back issues were now laid bare, and they required more than a few pieces of gear to straighten out. 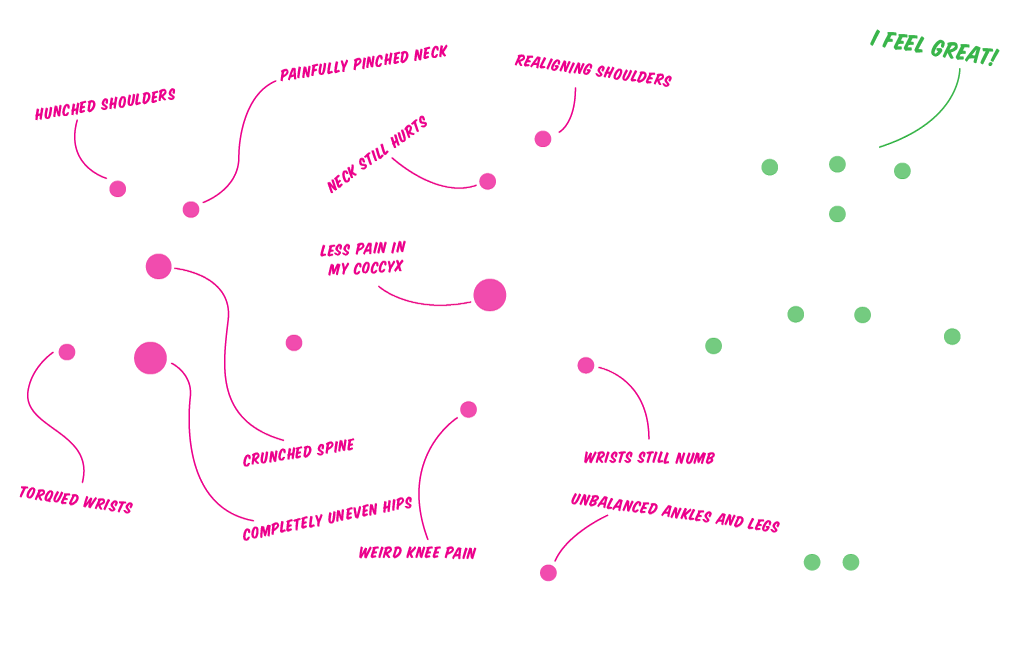 “Okay, tell me what you see.” It was my first visit to Rolfworks and my consultant Lynn Cohen had me standing mostly naked in front of a mirror, checking myself out in a clinical kind of way. I didn’t get it; after a minute of dumbstruck silence she patiently suggested I look at my shoulders. The right one clearly sat about two inches higher than the left one, one of those things I’d never noticed but was now impossible to unsee. Lynn is a structural integrationist (or rolfer, after the practice’s originator Ida Rolf) — a physical therapist specializing in fascia, the connective tissues that surround our joints. In the 1930s, Dr. Rolf recognized that the misalignment of fascia is a primary cause of muscle pain. The therapy she pioneered reverses the havoc wrought by gravity and bad posture on our bodies so that muscles can move about freely. Over the course of 10 weeks Lynn adjusted the fascia from my toes all the way up to my jaw in a sequential “head bone’s connected to the neck bone” kind of way: think deep tissue massage, only much, much deeper. Some people find it excruciatingly painful but rolfing turned out to be the perfect prescription for my twisted insides.

think deep tissue massage, only much, much deeper

To maintain my new alignment and prevent future problems Lynn spent a lot of time giving me a tour of my own behaviors: the solution to my lopsided shoulder was simply to relax. At first it required constant attention to keep my right side in line, but after a week or so I began to relax naturally and a big chunk of my neck pain gradually melted away. Lynn’s self-awareness lessons covered every part of how I carried my body from lying down (sleep on your back, not your side) to walking around (a tucked-in chin creates a relaxed neck). The most important lessons I learned, though, were about the subtle art of sitting.

Human bodies are just not built to sit down. Standing, walking, and laying down don’t require any specialized hardware, but sitting off the floor — the posture we spend most of our waking hours in — totally depends on a machine. As innocent as it may look, a chair is the most likely cause of office pain: it causes the bulk of our mass to fall on the “sits” bones (ischium bones) at the bottom of the pelvis, two knobby protuberances that are a far cry from the well-adapted and flat support structure of our feet. On the casual, dot-com cool end of the office spectrum is the “working in my underwear” pose: MacBook on the lap, neck and back hunched over, eyes straining down towards the screen, flat-typing in blissful ignorance. While this position certainly felt cushy and liberating for the first year I worked from home it was probably the most harm I’ve ever caused myself.

Although I’d toyed with a standing workstation made of haphazardly stacked books and boxes, there was something oddly discomforting about just standing up all day long: hadn’t us overeducated white people worked for our entire evolution to free ourselves from the bonds of physical labor? Lynn helped me pick an adjustable-height backless stool and told me how to use it: sitting near the front edge, pushing down on my feet to transfer some of the gravity away from my pelvis and spine. But that felt even more awkward than standing: if the whole point of my sitting posture was to transfer weight to my feet, why wasn’t I just standing on the dang things?

There are loads of pretentious adjustable standing workstations out there: articulating arms, motorized platforms, Swiss-engineered tilting platforms, whatever (my personal favorite: the special-order-only Explorer Pod that the employees use at Room & Board, $2,700). But like most of the important transactions in my life, my search ended on Craigslist: I trolled the “furniture” galleries for about an hour looking for something that might suit my needs and ended up with the FREDERIK, a $70 Ikea castoff with variable-height shelving. After a week with my Swedish friend I was completely over my “standing is awkward” phase — I’m convinced the only reason people sit down at all is because we’ve been conditioned to by the fuckin’ chair corporations. Herman Miller? Just another wing of the evil empire as far as I’m concerned, man. 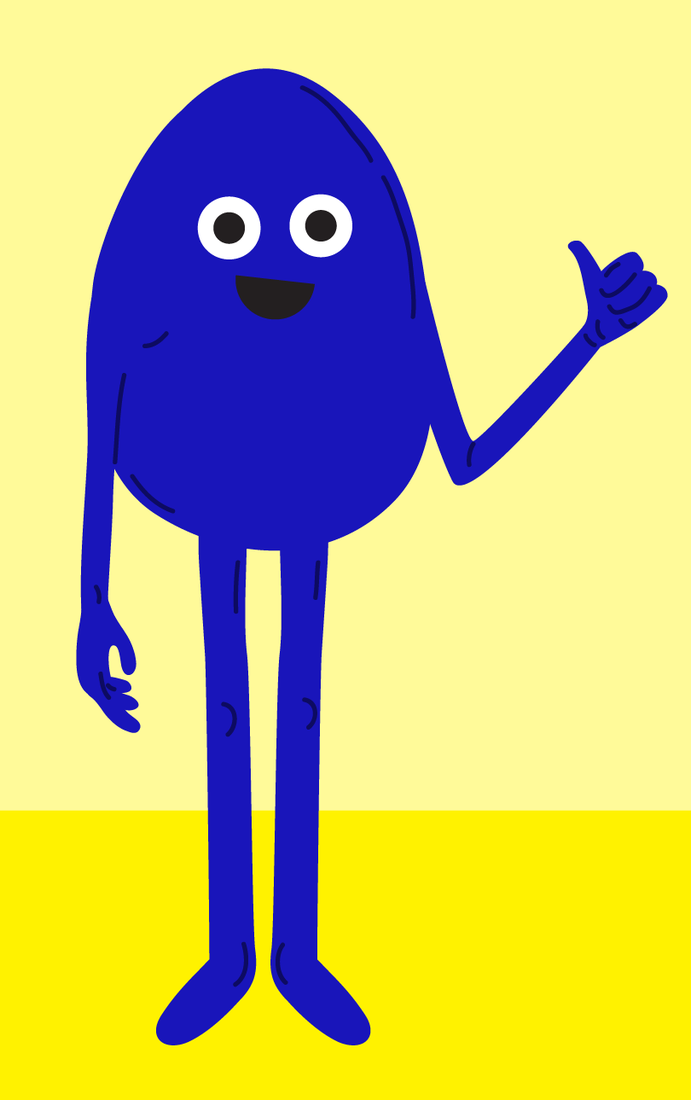 On a hardware level, I had found nirvana: the Kinesis keyboard, Evoluent mouse (supplemented by an Innovera wrist gel-pad), and my main man FREDERIK are still with me today. But this was all very American-capitalist-consumerist of me: I was trying to buy a way around my problem as opposed to treating it at its source. Although they were drastically diminished, I was still experiencing pangs of discomfort every day. To get my computer habit to a truly sustainable place, I just had to stop being online so much!

Like most of you who are still reading this diatribe, every aspect of my life was mediated by a mouse and keyboard: the internet is a quick and easy medium for working most of the time and chatting with friends or watching YouTube the rest of the time. But my body was sending me an excruciatingly clear signal that being chained to a console wasn’t right for me.

And so I began the process of distancing myself from the console. I cut back drastically on Gchat, stopped casually spending time on Facebook, ceased infinitely scrolling through miles of Twitter trash. I actively avoid broadcasted content: news I’m not close to, products I don’t need to buy, LOLcats that have already harvested their fair share of LOLs. More than anything, just chilling out a little bit online has shown me the true way to ergonomic freedom. I do inefficient stuff like go for walks and call people instead of emailing them. I spend a lot more time with my cat, who is actually pretty LOL if you get to know her well enough. Usually our health problems have simple answers: eat less, move more, relax. It’s a pervasive truth that I wish I had accepted before I spent all that time and money trying to figure out how to make it not feel like I had juvenile arthritis.

tl;dr: U got carpalz? Stand to type, get vertical mouse and keyboard, chill IRL instead of online.