Poison-proof mosquitoes might trigger a deadly crisis for thousands

Poison-proof mosquitoes might trigger a deadly crisis for thousands

Amid warnings of a looming malaria battle, new website puts the threat of insecticide resistance in stark relief

An Anopheles stephensi mosquito feeds on a human. The species is a common malaria carrier, and has grown increasingly resistant to pesticides in some regions. (Photo credit: Wikimedia Commons)

Every year, thousands of children die at the hands of a quiet, unassuming villain: mosquitoes, and the malaria they carry. Efforts to curb the disease have saved millions of lives over the past decade, but experts say an uphill battle may loom on the horizon, as mosquitos across Africa and Asia become increasingly immune to insecticides.

Last year, the World Health Organization (WHO) cited insecticide resistance as a growing threat to malaria control campaigns in Africa, saying "urgent action" is needed to stem the spread. Globally, malaria kills an estimated 650,000 people every year, most of whom are young children. In Africa alone, pesticide failure could result in an additional 259,000 child deaths every year, according to the WHO’s projections.

In its report, the WHO called upon governments to implement tighter monitoring policies and to report cases of insecticide resistance with more diligence, underscoring a critical problem: data remains sparse, inconsistent, and, until recently, scattered across disparate sources.

A deadly crisis may loom on the horizon

That's beginning to change, though, thanks to a new tool called IR Mapper. The website, which launched in earnest in April, collects data on confirmed and possible insecticide resistance from more than 50 countries — mostly from field reports and research papers — and displays them on an interactive map. Users can filter the data by type of pesticide and mosquito species, and can trace the spread of resistance from 1950 to the present.

IR Mapper was developed over the course of two years, as part of an initiative led by Vestergaard Frandsen, a Switzerland-based company that specializes in disease control products. The company compiled data on insecticide resistance in collaboration with the Medical Research Institute / US Centers for Disease Control and Prevention (KMRI / CDC) — a Kenya–US partnership for malaria research — while IR Mapper's interface was created by Esri Eastern Africa, a Nairobi-based software company.

IR Mapper collects data on insecticide resistance and displays them in a single map interface.

The idea is to bring country-level data from various studies and publications into a single platform, allowing policy makers and experts to see where pesticide resistance is most prevalent, and act accordingly.

"You can figure out where you need to do additional monitoring, or if you need to switch to a different insecticide because of rising resistance levels," says Helen Pates Jamet, head of entomology at Vestergaard Frandsen. "It helps put the right tools in the right place."

In malaria-ravaged countries across Africa and Asia, pesticides are typically sprayed indoors or applied to protective bed nets, forming a mosquito-killing shield. The disease can be cured with prescription drugs, but insecticide-laced bed nets remain by far the cheapest way to avoid the disease, and are especially critical in impoverished countries where malaria is most devastating.

Resistance has had particularly devastating effects in Nigeria, where nearly half the population is infected with malaria every year. Experts have long warned that resistance could hinder campaigns to stamp out the disease in Africa's most populous nation, but there are still no viable alternatives on the horizon.

The WHO currently recommends four classes of insecticides to combat malaria, with pyrethroids being the most common. According to the organization, resistance to at least one of these pesticides has been confirmed in every country where malaria is endemic. 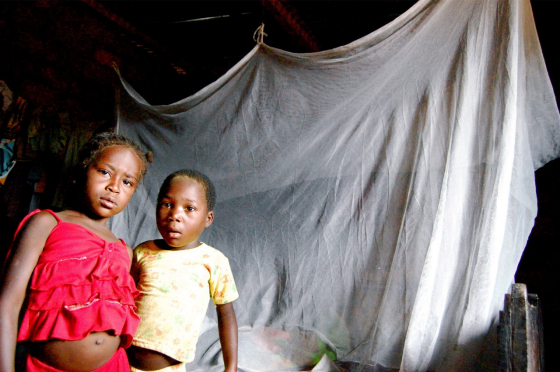 Researchers typically test for resistance by placing mosquitos inside a tube with pesticide-laced paper. Insects are exposed to high levels of the chemical for one hour, and any remaining survivors are then tallied. This process is repeated with varying concentrations of pesticide to determine the severity of resistance in a certain region.

The speed at which resistance develops can vary dramatically, though there have been cases where mosquitoes became immune within just one year. Exogenous factors can have an impact, as well. Research has shown that resistance can develop faster in regions where pesticides are already being used for agriculture, suggesting there may be some overlap between different chemical classes.

IR Mapper currently includes resistance data from 52 countries — mainly in Africa — though there are significant gaps. Little to no data is available on insecticide resistance in Chad or the Central African Republic, for example, both of which have some of the highest malaria mortality rates in the world. Vestergaard Frandsen is looking to expand its coverage in Asia and South America, as well, and plans to add an extra layer that would display the distribution of malaria rates alongside resistance levels.

"The biggest challenge is to translate this into action."

Dr. Abraham Mnzava, coordinator of malaria vector control at the WHO, acknowledges the value in a tool like IR Mapper, describing it as “very important step” in consolidating and sharing data. But identifying resistance is just the first step.

"The biggest challenge is to translate this into action at [the] country level," Mnzava said in an email to The Verge. "Managing insecticide resistance is the responsibility of all of us, not just public health workers."

The problem for policymakers, at least in the short term, is the dearth of options. Health workers can switch to a different insecticide if resistance develops, but only a few are suitable for malaria control. And because some target on the same part of a mosquito’s nervous system, cross-resistance can develop rather quickly.

Research teams are working on alternatives to existing pesticides, but it may be decades before a viable alternative reaches the market.

"it's hard to create new molecules if businesses don't have the incentives."

"For a completely new molecule, that can take 20 to 25 years, and several hundred million dollars," Jamet explains, likening the insecticide regulatory process to what pharmaceutical companies go through when bringing a drug to market.

Some companies have begun investigating whether agricultural pesticides could be repurposed for public health, and manufacturers such as Bayer CropScience and Japan-based Sumitomo Chemical have made battling resistance a priority in research and development. But Jamet notes that for the private sector, malaria-related chemicals remain comparatively less lucrative than agricultural pesticides.

"The public health space is not as commercially appealing as the agricultural one," she says. "So it's hard to create new molecules if businesses don’t have the incentives to pursue them."