Motorola’s long-rumored Moto X smartphone has finally appeared. It’s a slick looking device with hundreds of color options that can constantly listen for voice commands and subtly wake up portions of its display to reveal notifications. The Moto X is supposed to be Motorola’s first big step toward making a smartphone under Google’s influence. It looks great, but with mid-range specs, the question remains as to whether it’ll be able to stand up to Apple’s iPhone and the great Android devices already on the market. 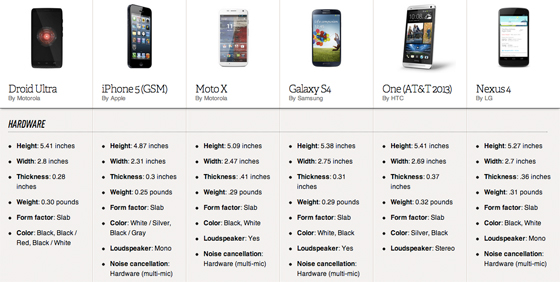 The Moto X immediately falls just a bit short of the latest and greatest by virtue of its display. At 4.7-inches, its 720p resolution should by all means look great, but it certainly can’t stand up against the pixel dense 1080p displays on the equally sized One and the slightly larger Galaxy S4. Even so, the Moto X is on par with the rest of the field — it just won't be able to show every glorious HD pixel of your favorite movie or TV show.

Though it may fall short elsewhere, the actual size of the device is pretty nice in comparison. At .29 pounds, the Moto X is lighter than all of the major Android phones and only just falls behind the iPhone 5. It has a fairly slim body that tapers from a .22-inches thick to .41-inches thick. And though it's taller than the iPhone, it's 5.1-inch height is impressive compared to the Nexus 4 and HTC One, both of which add an extra quarter-inch on top despite having the same display size.

Like the new Droid Ultra, the Moto X is running Motorola's X8 processor, a customized version of the Snapdragon S4 Pro. This is where the device really falls behind: unlike the other big Android smartphones, Motorola's processor has only two CPU processor cores, while everything else is running on newer, faster quad-core processors. The phone does manage to keep up on RAM, but its battery also ends up falling onto the less capacious side of things. It doesn't fall short by much though, and its battery may simply hold out longer because of the phone's lower resolution display and slower processor. 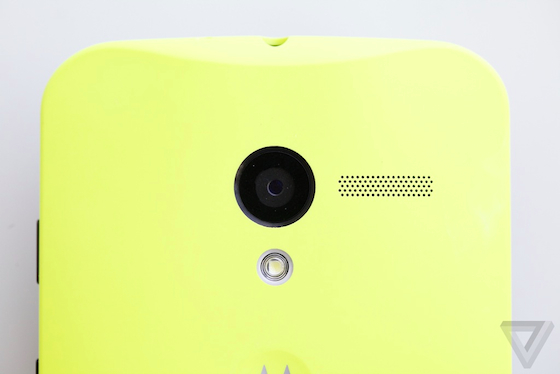 Below par specs when compared to the best

At least as far as cameras go, the Moto X should sit comfortably in the field. Its 10-megapixel rear camera is numerically bested only by the Galaxy S4, and it sits evenly with the Droid Ultra and the iPhone, which can take some excellent pictures at that same resolution. The Moto X might even stand above the HTC One and the Nexus 4: while the HTC One’s camera can be great, it sometimes produces soft images, and the Nexus 4’s camera has become far outclassed by newer Android devices all around.

One of the biggest draws to Motorola's latest phones are a few high-tech features that aren't available anywhere else just yet. The biggest of those is hands-free Google Now: just by talking to the phone, users will be able to look up information and have it read back to them. Another trick bundled in is a quick access camera gesture — by flicking your wrist when holding either the Moto X or the Droid Ultra, the device's camera will automatically open. Those features aren't strictly game changers, but they're cool additions that should make the devices stand out.

Not a game changer, but a compelling option

Even if the Moto X doesn't quite match up with the best of the best, Motorola’s first big phone under Google looks good in a lot of ways. Choosing the Moto X will mean making some performance tradeoffs, but its exclusive features, near-stock version of Android, and wild color options should make it a compelling choice when it hits stores later this year.

More from this stream Moto X: Google and Motorola try to stage an American comeback story