After years of struggling to find the right voice for its consumer electronics products, HTC is today announcing the launch of its latest ad campaign. The new campaign called "Change" features Robert Downey Jr, who has signed a two-year contact to be HTC's "Instigator of Change." New ads will debut first on YouTube on August 15th and will also appear on television and in pre-movie spots.

The initial focus will not be on HTC's One nor on software features like BlinkFeed, Video Highlights, and BoomSound. Instead, Downey, (who blessedly hasn't been named a "Creative Director") will vamp around various sets as different jokes about what the initialism HTC could stand for are played out: get ready for "hipster troll carwash," "hold this cat," and plenty more. Later spots, HTC tells us, will finally come around to featuring its products more explicitly. 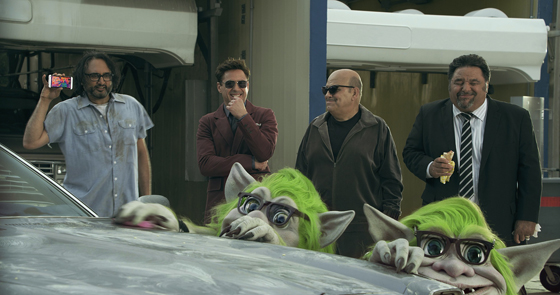 Despite the success of its excellent One smartphone, HTC has for some time appeared to be in a state of disarray. The company retired its "Quietly Brilliant" tagline back in March as a first effort to refresh its brand, and "Change" is the first of its latest efforts toward doing so. This is no small operation for HTC, either. The company says the social media campaign it's crafted is the largest it has ever staged. Can Robert Downey Jr., who HTC says worked closely with its advertising team to develop the new ads, actually sell some phones? We're about to find out.

How To Collapse: do slumping sales and an executive exodus spell doom for HTC?