Microsoft is expected to finalize its Windows 8.1 update in the coming days, but a near-final build has leaked online offering a closer look at some of the improvements. The 9471 build, a test version of the Release to Manufacturing (RTM) build that will be made available later this month, includes some intriguing changes around the usability of Windows 8.1 across touch, the keyboard, and the mouse. Microsoft is changing the way its context menus work in Windows 8.1, and helping users discover how to use the OS.

In the latest leaked build there's now a row of three dots that, like Windows Phone, bring up the application bar with additional settings and options in the Mail, People, Calendar, and other built-in applications. The changes are clearly designed to improve the discoverability of features in Windows 8.1. Alongside the context menu changes, Microsoft also displays tips within the built-in apps that direct users to swipe and access the Charms. None of these changes were present in the Preview version of Windows 8.1, and Microsoft has also created a Help + Tips app that includes a variety of video tutorials for navigating the OS, accessing files, basic actions, and settings. 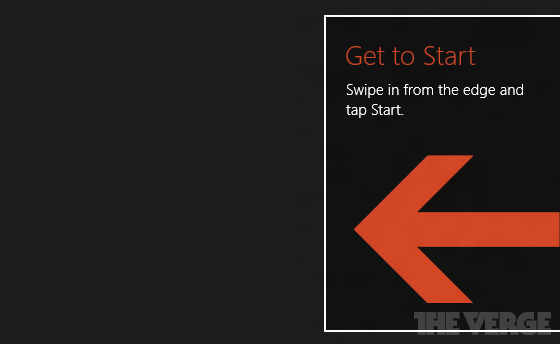 Microsoft is also supplying some of the parallax scrolling wallpapers for the Start Screen. A robot moves as you scroll, as well as an option to set a fire dragon that also changes as the Start Screen progresses. An updated Mail app is also included in the latest Windows 8.1 build, with a new sidebar for quick access to categories, folders, and favorite people. Mail also includes the ability to drag and drop items, as well as open new windows for multitasking. The Calendar and People apps also include some UI alterations, with a new "what's next" view in Calendar that shows appointments for the day ahead.

Microsoft dropped Facebook and Flickr photo integration in the preview version of Windows 8.1, and there's no sign this is making a return in the pre-final version. SkyDrive is now fully integrated into the Photos app, but Facebook and Flickr are both missing. Skype is also pre-installed in this latest leak, a move designed to replace the existing Messaging app in Windows 8. Other new apps like Health & Fitness and Food & Drink are also bundled into the default Windows 8.1 install.