Share All sharing options for: Judge rules that LG's $300 million US headquarters won't be an eyesore

Despite strong opposition from local groups, LG has gained approval to build its new US headquarters on the banks of New Jersey's Hudson river. After initially having its decision to build its $300 million headquarters approved, LG faced a pair of lawsuits challenging the plan, claiming it would ruin views of the Palisades, a group of steep cliffs above the western shore of the Hudson. A Superior Court judge dismissed the opposition, siding with LG's case that the positives of the new headquarters far outweigh the negatives. Explaining the decision, the court said "LG had met the positive criteria requirements because the project promoted the general welfare by maintaining jobs, promoting green building design, providing adequate light, air and open space, providing energy efficiency, and utilizing renewable energy sources."

"There is no place in the world that you can see a space that a 17th Century explorer saw."

The opposition to the plans includes the Metropolitan Museum of Art and the non-profit environmental group the Natural Resources Defense Council. Last month Harold Holzer, a spokesman for the Metropolitan Museum of Art, claimed that "there is no place in the world that you can see a space that a 17th Century explorer saw. Only in New Jersey. That’s something to cherish, not to violate." 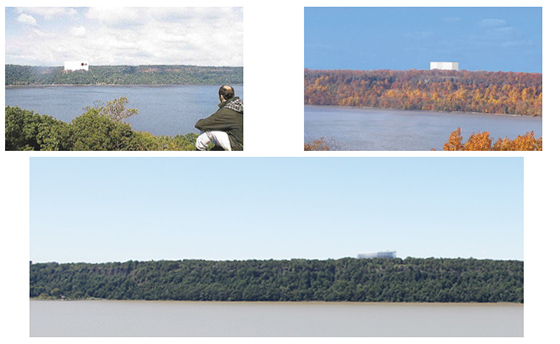 A pair of mockups claim to show how the new complex will affect the Palisades. The lower image is LG's render of the project's impact.

LG has always maintained that its project will not impact the environment as much as opposers claimed. It created a public-facing website, LG Englewood Cliffs, explaining that mockups that appeared in publications such as the New York Daily News were inaccurate, and providing its own renders. In a "Fact vs. Fiction" page, the company says the new complex will be built on private land a quarter-mile back from the Palisades, rather than in the protected area, and says the building will be "barely visible above the tree-line." It also notes that, as the building's facade is almost entirely glass, it will "reflect its surroundings and blend into the surrounding environment."

LG claims it "listened carefully to the concerns of local residents and community groups," and amended its plans "to address those concerns." When building work is completed, LG employees will now have a fairly spectacular view of New York City's skyline from their new HQ.