Looking to capitalize on buzz surrounding its brand new G2, LG held a public event in Seoul Friday where it teased that up to 100 people would walk away with the new flagship smartphone. What it didn't expect was that 20 people would also come away from the day's proceedings with injuries, leading the company to call off plans for similar events across South Korea.

Taking the "G in the Cloud" event theme quite literally, LG decided on a unique but ill-conceived method of delivering those free phones to attendees. Coupons that could be redeemed for a G2 were attached to balloons and floated up into the sky, leaving LG's fans to devise their own methods of grounding the balloons. Perhaps the potential for injury should have been apparent when someone joined in carrying a large, pointed staff seen in the local news report below (at around the 1:23 mark). But that wasn't the worst of it; looking for a surefire way to secure LG's latest handset, some attendees were reportedly carrying BB guns. From there, ultimately 20 people wound up injured.

LG has pledged to cover any medical costs incurred by those in attendance. "We will provide them with proper medical treatment as we are responsible for the event," the company told The Korea Times. To add insult to injury, it seems the agony of those involved went for naught, with many of the balloons quickly rising out of their reach. Another look at the carnage can be seen below. 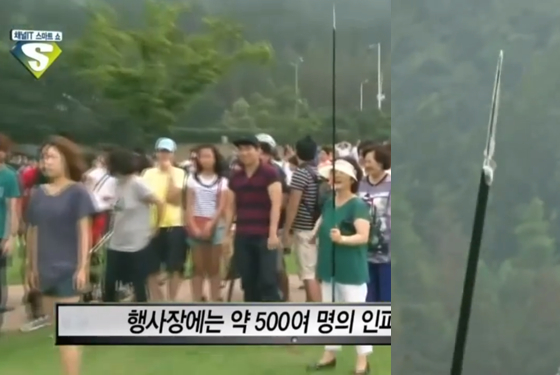