Share All sharing options for: Sony's rumored 'lens cameras' turn any phone into a point-and-shoot

After leaking ultra-low fidelity images last month, Sony Alpha Rumors has uploaded the first high-resolution photos of Sony's new wireless "lens camera" series. The lens cameras are essentially a lens, a sensor, and all of the accouterments needed to take a photo in a single package, such as an SD card slot and a processor. The cameras will reportedly click onto smartphones, and will connect wirelessly to allow the phone's display to work as a viewfinder. 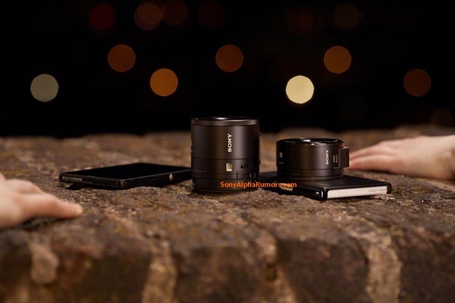 According to Sony Alpha Rumors there'll be a range of such cameras. The one pictured at the top of this article will feature a 10x zoom f/3.3-5.9 G lens with a 1/2.3 inch 18-megapixel CMOS sensor. Expect performance on that to be similar to Samsung's Galaxy Camera. The high-end model will be a little more special, however: it's based on the lens and sensor found in Sony's superb RX100M2. As previously reported, the high-end accessory will feature a 1-inch 20.2-megapixel Exmor R sensor and an f/1.8 Carl Zeiss lens.