Drunk and chic: meet Lapka BAM, the iPhone of breathalyzers

Share All sharing options for: Drunk and chic: meet Lapka BAM, the iPhone of breathalyzers

What would a breathalyzer look like if it were designed in the iPhone era? It probably wouldn’t look like the BACtrack Select S80 Professional Edition, a heap of plastic with a '90s-era digital readout, which is Amazon’s top-selling breathalyzer.

Russian designer Vadik Marmeladov wanted to build a breathalyzer that looked like something James Bond would use if he had one too many Vodka martinis — the kind of tool he wouldn’t be embarrassed to pull out of his pocket at a club. He built the Lapka Breath Alcohol Monitor, a handsome ceramic cylinder that monitors your blood alcohol content and sends it to your smartphone using sound waves whenever you blow into it. It’s up for pre-order starting today.

Marmeladov and his small team of designers and engineers didn’t exactly start from scratch. They previously built the Lapka Environment Monitor, a bundle of sensors for measuring the temperature, humidity, radiation, and organic content of your surroundings. Marmeladov anticipated skepticism from consumers, but when Urban Outfitters picked up Lapka and sold out its stock twice in a row, he knew they were onto something. "We will never sell a million units," says Marmeladov, "but for a radiation sensor, it’s very very good." The Lapka Environmental Monitor’s success indicated that there might be a market for beautiful and modern scientific devices and tools outside of sci-fi movies.

"We will never sell a million units."

The next step was to build something that would be more useful on a daily basis than a pocket Geiger counter. Marmeladov arrived at the breathalyzer, which to him is a vastly undervalued personal measurement tool that has gone largely unchanged in the last few decades. To the Lapka team, a breathalyzer is not just a means of gauging your level of inebriation, but a way to measure your blood chemistry and get to know your body. It’s not so different from a Jawbone Up or Nike Fuelband, they say — two devices that help quantify your existence and provide more transparency about your personal health. (Of course, if you’re tracking drunkenness over time the same way you track fitness, a serious look at your lifestyle might be in order).

The Lapka BAM looks like something Jony Ive could have crafted, a pristine, buttonless cylinder made of the same diamond-ground ceramics used in Panerai watches. Inside the device is a police-grade electrochemical fuel cell sensor which estimates your blood alcohol content (BAC). To activate the BAM you simply cup one hand around it and blow. Your breath activates a switch that turns on the device, almost as if you were playing a woodwind instrument. The BAM then emits an inaudible sound wave carrying your BAC, which your phone intercepts and displays on-screen in the Lapka app. Lead engineer Sergey Philippov chose sound over Bluetooth since it provided much better battery life, and it somehow still works even in loud clubs. "Speech, yelling, or music at any volume will be around 100-5kHz, and Lapka operates around 18kHz," says Marmeladov. 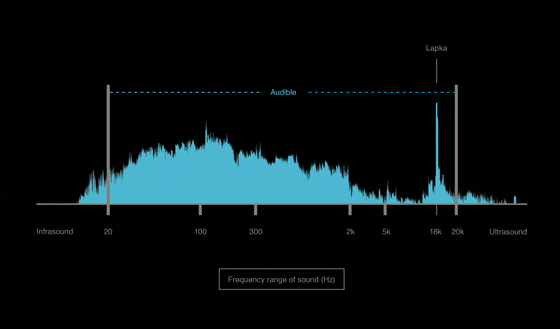 The app can keep track of your BAC levels and provide funny quips like "Go mingle" when you’re at .06, but there’s another twist. "If you’re drunk, you shouldn’t see the same app," says Marmeladov. Lapka for iPhone and Android increases its font size as you drink more, and even scraps its gestural interface and displays virtual buttons if you’re drunk enough. If you blow a .20, the app might even buzz your phone the next morning to make sure you’re okay. It’s all a bit cute for a breathalyzer, but the Lapka team has succeeded in elevating the device above its cultural stereotype and using it objectively, as a data-gathering tool. Perhaps someday, the Lapka BAM will hook into your own personal API the way you'd expect other quantified self gadgets to do.

Marmeladov has made recording your BAC fun, which could make him an enemy of moms everywhere

It’s also far less uncomfortable to use in public, since it’s smaller than your hand. "We wanted to create a beautiful device that disappears," says Marmeladov. "The device is your hand, and now you have a new gesture — a new behavior to measure something." He has also eliminated the replaceable mouthpiece that makes most breathalyzers awkward to share with friends, which you now might do, since the Lapka app has a "party mode" that lets you compare BAC scores with friends. Marmeladov has made recording your BAC fun, which could make him an enemy of moms everywhere.

The Lapka BAM launches in October and is priced at $199.99, which is surprisingly competitive with other breathalyzers on the market that sync with a smartphone. Looking forward, Marmeladov hopes to build a consumer healthcare brand that makes the technology behind its products invisible, yet accessible to anyone. "People are going to give us really intimate moments in their lives," says Marmeladov, "So they shouldn’t think about the product." He re-emphasizes that he’s not judging your behavior — he’s only quantifying it. "We don’t want you to stop drinking," he says. "This is a ritual and you have to make it right. Lapka will guide you."