Artist Sabine Pearlman’s Ammo looks at the hidden structures, the "otherwise invisible architecture," inside some 900 different types of ammunition. The photographs are unadorned, with no information to guide the viewer through what he or she is seeing, which Pearlman tells National Geographic is part of the project’s point. "I wanted to keep them out of context, in order to make it possible for people who look at the images to appreciate them for many different reasons," she said. The cross-sections themselves are part of a private collection housed in a Swiss World War II bunker. 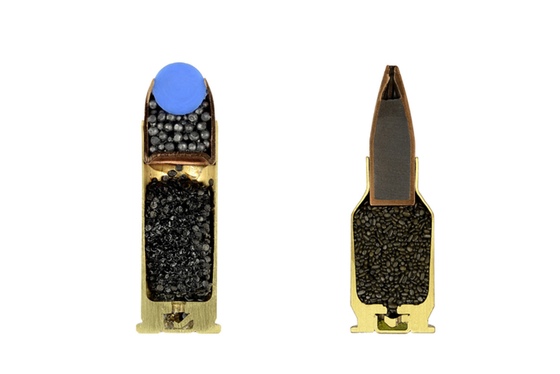 The beauty in the subjects’ shape and precision distracts the viewer from their more sinister purpose, at least momentarily. Speaking to Lenscratch, Perlman says that she grew up in Austria, where memories of World War II still loom large, but when she emigrated to the US she met others with very different feelings toward firearms. "After many debates on the subject, I came to realize it’s one of the oldest themes known to human kind — it touches on the primal instinct of survival," she explained. The artist says she plans to exhibit and publish her work, but in the meantime, visit Pearlman’s site for more images from the series.