The professor who built a villa on top of a Beijing skyscraper has been ordered to prove it was built legally or dismantle his new home. Professor Zhang purchased the top floor of a 26-story building some time ago, and spent six years building the two-story villa that sits on its roof. Reportedly without planning permission, Zhang moved ton after ton of rocks and foliage up to the roof, creating what he says is "just an ornamental garden." Although it could be mistaken for a rock garden from afar, closer inspection reveals there's clearly a house hidden within. 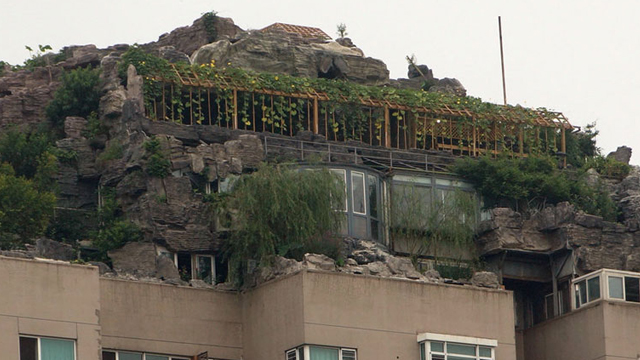 The construction of the rooftop mansion was disputed by local residents, who complained about noise, broken pipes, and, since its completion, loud parties. But it wasn't until photos of the structure were widely distributed by the Chinese media that local officials took action. The building will now be torn down in 15 days, unless Professor Zhang can prove it was legally built. A district urban management official tells the Associated Press that Zhang has yet to provide any evidence.