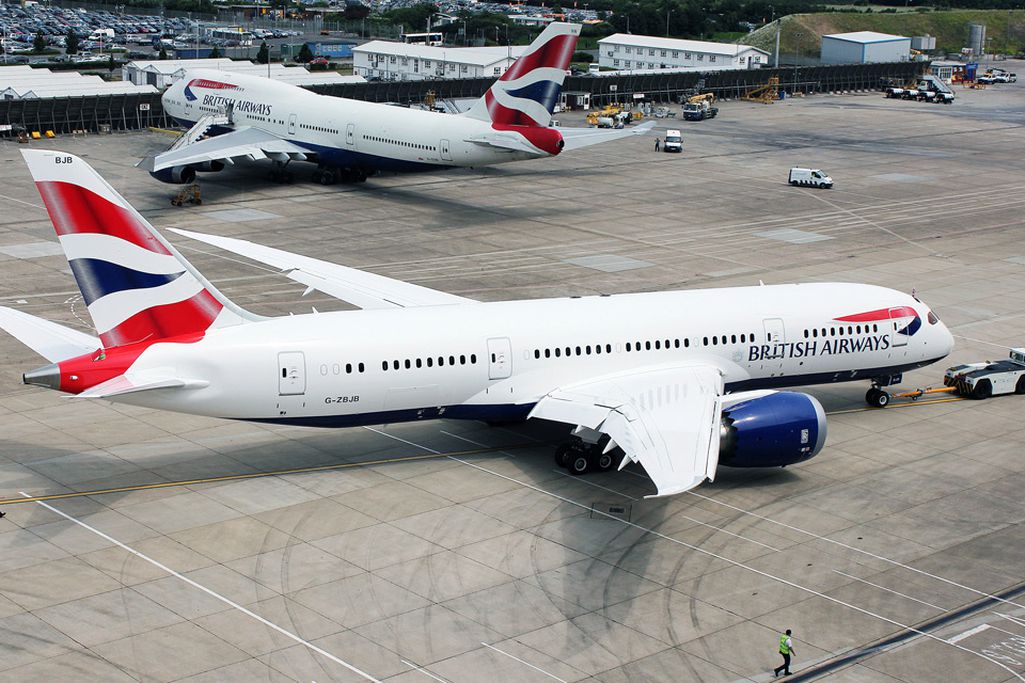 Nestled in the outskirts of London, Heathrow Airport began life 83 years ago as a modest facility for testing and assembling aircraft. It didn’t serve commercial flights until a decade and a half later, when the conclusion of World War II made it available to civil purposes, but since then it has rapidly grown in importance to become one of the world’s preeminent transport hubs. Like the centerpiece in a global matryoshka doll, Heathrow can be found at the heart of many overlapping spheres of interest. It’s the nexus of transatlantic business and trade, the landing spot for millions of tourists every year, and the departure point for British royalty and subjects alike.

Heathrow’s unplanned beginnings and burgeoning popularity have combined to create a chronic problem for the airport: demand for its services continually exceeds the available supply. In a March 2013 submission to the UK Airports Commission, Heathrow Airport Limited reports that it’s “already operating at its permitted capacity.” What’s more, it goes on to note, estimates from the Department for Transport “indicate that by 2020 there will be 11M of un-served passenger demand at Heathrow and 28M by 2030.”

Multiple efforts to accommodate the increasingly globalized traveler community have resulted in the opening of the £4.3 billion ($6.7BN) Terminal 5 and the currently ongoing £2.5 billion ($3.9BN) refurbishment of Terminal 2. Despite their immense cost, these projects will only marginally improve Heathrow’s capacity, primarily by routing passenger and aircraft flows more efficiently. Ultimately, if the airport wants to fully live up to its dual role as an international hub and a gateway into London, it’ll have to grow to include a third runway. 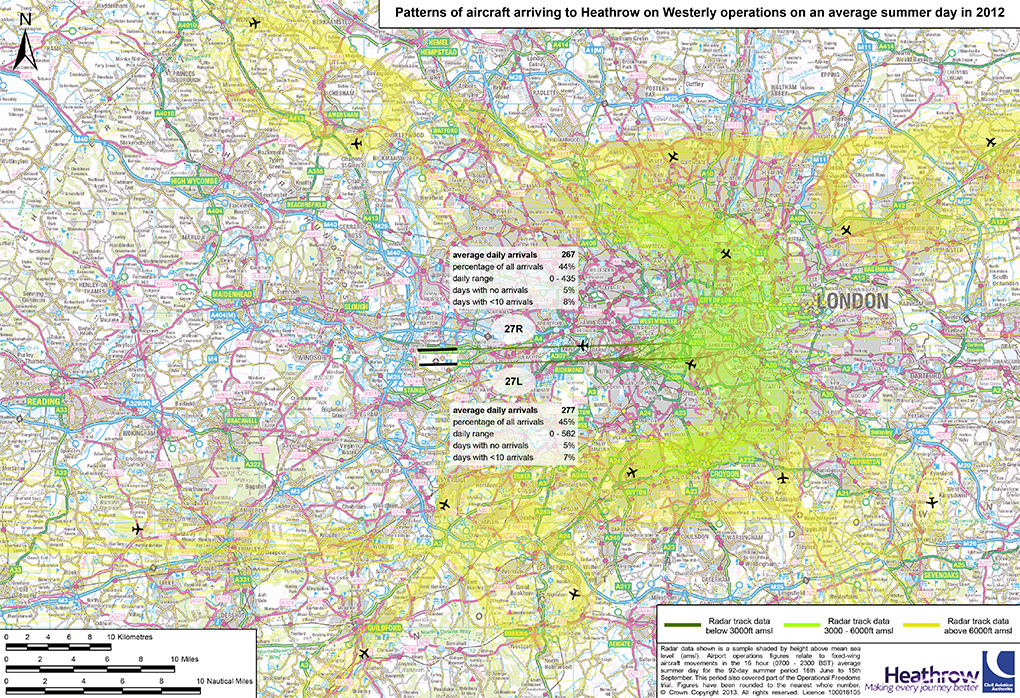 All flight paths lead to Heathrow

Plans for a third runway and a sixth terminal at Heathrow were approved by the UK government in 2009, but were scrapped a year later following a change in leadership. Some of the strongest opposition to expansion has come from local community groups, councils, and grassroots organisations. John Stewart, chairman of the Heathrow Association for the Control of Aircraft Noise (HACAN), tells The Verge that some 725,000 local residents are affected by Heathrow aircraft noise, which amounts to more than a quarter of all people suffering from aircraft noise in Europe.

Whether departing or arriving, most planes have to follow a flight path directly over London, and their environmental impact has drawn the ire of more than just the locals. Before the 2009 plan was announced, Greenpeace and a group of celebrity endorsers purchased a plot of land at Heathrow in order to obstruct the building of a third runway.

Heathrow’s response to these concerns has been bullish: the operating company argues that it can deliver a sustainable airport that will handle more flights with less noise. It already levies a variable landing charge that incentivizes airlines to use quieter aircraft, and it also has a "flightpath respite" scheme that aims to spread out the noise by alternating runways. These and other efforts have helped Heathrow reduce its noise footprint over recent years while growing to handle nearly half a million flights per year.

Even with 70 million passengers and 1.5 million metric tons of cargo passing through Heathrow annually, business leaders maintain that greater expansion is absolutely essential. Without it, the argument goes, the surrounding region risks losing jobs as well as its international competitiveness, with airports like Frankfurt, Amsterdam’s Schiphol, and Paris’ Charles de Gaulle ready to pounce on any business that Heathrow can’t handle. These economic interests are in direct conflict with the concerns of local residents and environmental groups, leaving open the thorny question of what is to be done.

If Heathrow can no longer be Heathrow, will someone else step into its big shoes?

The UK Airports Commission has been set up specifically to tackle the multifaceted challenge of expanding London’s air connectivity and is presently assessing more than 50 different proposals. Heathrow itself is pitching in three different options for constructing that controversial third runway. The airport authority claims that expansion of its infrastructure would deliver a £100 billion ($155BN) boost to the UK economy at a cost of £14 billion (nearly $22BN) and with a completion date in 2025. Ambitious as ever, each of the Heathrow proposals also allows room for a fourth runway, should one ever prove necessary. 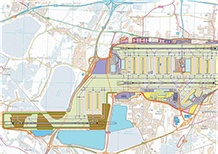 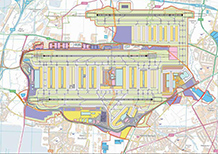 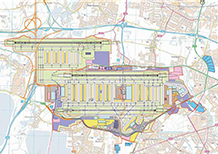 However profitable it may turn out to be, the idea of a four-runway Heathrow is already being disputed by anti-expansion campaigners. John Stewart of HACAN goes for intentional understatement when he describes Heathrow's estimates as "hugely optimistic." He also points out that flight demand could be drastically reduced if oil prices rise or the industry's tax breaks are curtailed. HACAN and other skeptical groups support more incremental upgrades to London's Gatwick and Stansted airports as a means to reduce Heathrow’s burden.

London Mayor Boris Johnson has advanced a far more radical plan for the outright replacement of Heathrow with a multi-runway hub airport to be built atop a man-made island in the estuary of the River Thames. He has since moved to support an alternative plan, authored by renowned architect Sir Norman Foster, that pitches a similar four-runway behemoth to take over Heathrow’s role of primacy. Among the key benefits touted by these plans is a lower noise impact, allowing the airport to operate 24 hours a day, plus a cohesive layout that would cut flight connection times down to 45 minutes.

The cost of the Foster + Partners bid is estimated at £24 billion ($37BN), which the designers claim can be raised through private investment, with the project becoming partially operational in 2029. Accounting for all potential economic benefits, the Thames Hub Airport would deliver £75 billion ($116BN), paying off its initial costs within the first decade. These numbers don’t compare well to the projected timescale or revenues of a Heathrow expansion, however they’re also not subject to the same burden of widespread public disapproval.

Gatwick and Stansted offer the most modest ideas, with the former airport asking for a frugal £9 billion ($14BN) to get a new runway up and running by 2025. The vision is for London’s air traffic to be redistributed among "a constellation" of competing airports, which is expected to result in up to £56 billion ($87BN) of economic growth. As Mayor Johnson’s competing proposal points out, however, fragmenting London’s air connectivity in that fashion would deprive the city of its ability to function as a hub for connecting flights — which it is ideally positioned to do given its centrality in the developed world.

In 2012, close to one percent of the world’s population passed through Heathrow

The alternatives to Heathrow are numerous, varied, and in some ways preferable, but they may already be irrelevant. The Financial Times reported this week that none of the major airline alliances currently operating out of Heathrow are willing to move away. SkyTeam, the Oneworld Alliance, and the Star Alliance — among whose members you’ll find Delta, United, Swissair, Lufthansa, and both British and US Airways — are all equally resolute in their commitment to Heathrow. The FT also notes that SkyTeam has already declared that "relocating to another London or UK airport is not an option for our members."

The independent Airports Commission will offer its preliminary report on the various pitches for air capacity expansion by the end of this year. It’ll suggest incremental strategies to cover the UK’s short- and mid-term aviation goals, but the Commission’s final assessment will be reserved until summer 2015. With Heathrow’s established cachet as a global brand, improving customer satisfaction ratings, and almost universal airline support, that 2015 report is shaping up to recommend a future that looks like a bigger version of the present.