Share All sharing options for: China set to overtake US as world's largest oil importer by October

China is on the cusp of overtaking the United States as the world's largest importer of oil, according to the latest projections from the US Energy Information Administration (EIA). In a report published last week, the EIA said Chinese net oil imports will surpass US net imports by as early as October 2013. China will likely be the world's largest net importer on an annual basis by 2014, and the EIA expects the gap to only widen from there.

The EIA attributed its projections to growing demand in China, coupled with a surge in domestic oil production in the US. In its annual report last year, the Paris-based International Energy Agency (IEA) predicted that the US will become the world's largest producer of both oil and natural gas by the year 2020, transforming all of North America into a net oil exporter by 2030. The EIA says US production will grow by 28 percent over the next three years, reaching nearly 13 million barrels per day, while Chinese output is expected to grow by just six percent over the same period. By 2014, Chinese oil production is expected to be just one-third of US output, according to the EIA's forecasts. 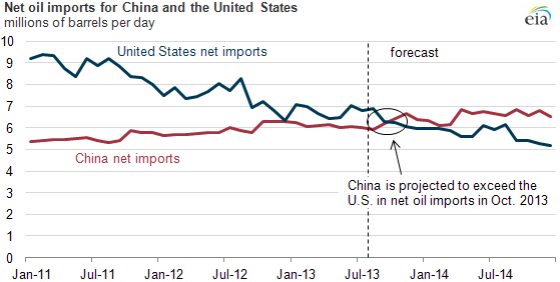 The rise of domestic shale gas production has lessened American dependence on foreign energy sources, though there are serious concerns over hydraulic fracturing, or "fracking" — a technique whereby chemicals and pressurized water are used to release underground wells of natural gas. France and other countries have banned the practice amid warnings that it may have dangerous consequences for the environment and public health.

China, meanwhile, remains intent on pursuing renewable sources of energy, even as its domestic appetite for oil continues to grow. Late last month, government officials said spending on renewable energy could reach 1.8 trillion yuan ($294 billion) by 2015, as Beijing considers investing another 2.3 trillion yuan ($380 billion) on low-emission projects in the coming years. The country has also reiterated its commitment to cut carbon emissions by 45 percent by the year 2020.

"China and the US will no longer be pure competitors in the energy sector."

In the short term, however, China will likely remain dependent upon oil and other fossil fuels to meet its growing energy needs. The People's Republic is already the world's biggest energy consumer, and emits more carbon dioxide than other country. And as Chinese consumption rises in parallel with US production, some are predicting a major shift in global trade patterns.

"China and the US will no longer be pure competitors in the energy sector — China is likely to import energy in bulk from the US," Li Dongchao wrote in a piece for the China Business News on Monday. "The (rising) independence of US energy will support the rejuvenation of US manufacturing, which will renew competition with Chinese manufacturing."