For nearly two decades, Microsoft has sold ergonomic keyboards, but you likely haven't used one for very long, if at all. The reason? It isn't because typing on a flat surface is more comfortable or healthier for you. It's largely because ergo-hardware has been bulky, dated, and just plain uncool, says Suneel Goud, the product manager behind the first significant reboot in the history of Microsoft's ergonomic accessory line.

"That natural design that we came up with in 1994, it has probably been one of the most studied, one of the most iconic designs in the ergonomic keyboard space," Goud told The Verge in an interview. "But, if you think of what we've done with it over the last 20 years, we've mainly focused on the colors, the materials." On Tuesday, that changes with the introduction of Microsoft's Sculpt Ergonomic keyboard and mouse — a new setup that wouldn't look out of place on J.J. Abrams' Starship Enterprise. The new Sculpt series marks an entirely new approach to both the design and branding of Microsoft's PC accessories business, Goud says. 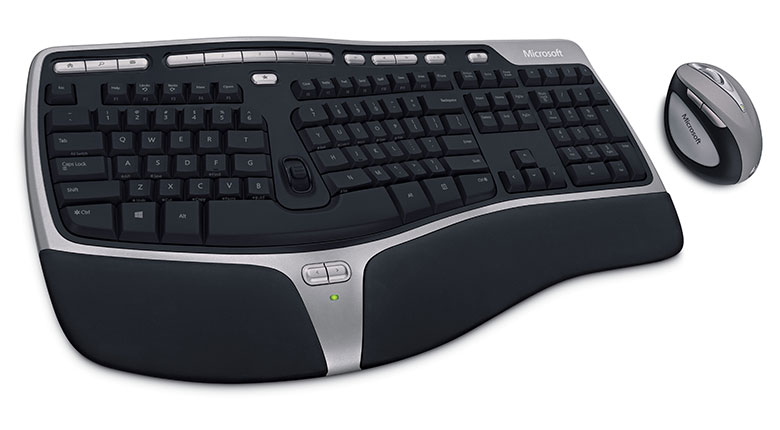 The last time Microsoft released a new ergonomic keyboard design was 2007's Natural Ergonomic Desktop 7000, which looks and sounds boring by today's standards. "What we wanted to do, and what we challenged our design team, engineers, and our ergonomists to come up, is something that preserved all the ergonomic goodness that we have — but to also make it look cool," he says. "We don't want to just appeal to the ergo-enthusiasts. We want to get more people to experience the benefits of all this. We needed a design and a name that draws people in."

Designing the new Sculpt Ergonomic keyboard and mouse was a two-year process with a focus on stripping previous designs down to their essential elements, Goud explains. The split keyboard layout is essentially the same as previous Microsoft ergonomic keyboards, allowing hands and forearms to sit in a more natural, relaxed position. The middle of the keyboard maintains the dome shape seen since 1994, but the new design is about one-fourth as thick as some of the old keyboards. What's left is a thin, hollowed out form. There's an included row of Windows-8-specific keys that can be changed to function keys by way of a built-in toggle for those using a Mac or earlier versions of Windows. And the number pad has also been detached from the keyboard itself, sitting as a separate piece you can move around freely.

An entirely new mouse design with a Windows button, which (like the keyboard) reduces wrist pronation, is included in a $129.95 bundle that starts shipping on August 15th. Separately, the Sculpt Ergonomic keyboard will sell for $80.95, and the mouse will sell for $59.95. Both operate wirelessly over a 2.4 GHz connection and promise outstanding battery life — 3 years for the keyboard, 6 years for the number pad, and 1 year for the mouse, Goud says. "The code name for this was manta ray," he said. "We wanted people to be drawn in by the design, but to recognize the comfort. Hopefully they'll think it's really cool too."