Could switching to Android and focusing on business have turned the company around?

In the summer of 2012, just a few months into the job, RIM (now BlackBerry) CEO Thorsten Heins was trying to guide the company through an ongoing crisis. The stock price had slipped to an eight-year low; BlackBerry 10 had been pushed back to the next year. And a Silicon Valley investor was secretly trying to buy the company out from under its management team.

Yesterday, entrepreneur and angel investor Robin Chan posted a slide deck for "Project BBX," a now-abandoned plan to turn around the company with a small product and engineering team. With BlackBerry now officially exploring a sale, Chan’s plan offers a glimpse of what BlackBerry might have become — a purely business-focused company with no BlackBerry 10, fewer devices, and no reason to hire Alicia Keys as a creative director. Instead, it would focus on its trademark phones and data network, leaning on iOS and Android in order to survive.

"There were a lot of people who loved the BlackBerry product and were sad to see it deteriorate."

Chan pitched the project between June and August of last year, some six months after former COO Heins stepped up to lead RIM. The slides aptly pegged RIM as "a company coming apart at the seams," pointing to its plummeting value and utter failure to develop an app ecosystem. To save it, Chan tells The Verge he assembled an "elite dream team" of designers and engineers, whose names he won’t reveal. "The thing that surprised me is there were a lot of people who loved the BlackBerry product and were sad to see it deteriorate to such a state," he says. The group reached out to RIM’s board of directors, hoping to get enough momentum to buy out the company: "Essentially, what we were doing was a coup d’etat." Ultimately the group failed to raise enough funds, ending up with $1 billion rather than the minimum of $6 billion they needed to pursue the plan. 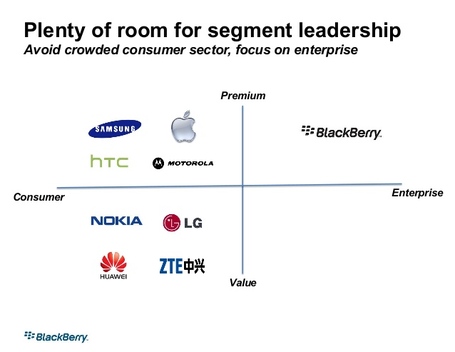 The team’s plan for BlackBerry played to the company’s obvious strengths — and recognized some weaknesses that Heins wouldn’t admit. RIM’s servers were still ubiquitous for businesses, even as iOS and Android devices edged out BlackBerry phones in the office. Chan referenced other symbols of the BlackBerry in its heyday, including the much-loved hardware keyboard and the "CrackBerry" moniker, "the only other true brand in mobile along with Apple." If Apple had opened up smartphones to consumers, he believed, the BlackBerry could rebuild its cachet with high-powered executives.

If the iPhone was for consumers, Chan wanted to bring back the business 'CrackBerry'

To do so, RIM would have had to all but scrap its plans to compete with other smartphone platforms. In the summer of 2012, Heins was insisting that BlackBerry 10 would be "the only completely new mobile platform on the market," but to Chan, it was an albatross. "There was going to be a duopoly in operating systems between Android and iOS," he says. "Facing those trends and riding those trends was a bigger opportunity than tinkering with what they were trying to do." While Heins and RIM saw themselves in a war of operating systems, they should have been focusing on the surrounding infrastructure.

"[BlackBerry 10] was misallocation of meager resources," says Chan. His plan would have jettisoned the upcoming platform in favor of an Android fork, optimized for security and enterprise with a few BlackBerry 10 features thrown in. And RIM’s secure networks would have been opened up to iOS and Android; an "iBerry" system was planned for launch within six months. He compared the turnaround to that of IBM, which reinvented itself by selling off its flagging hardware business.

Despite the comparison, Chan wouldn’t have discontinued hardware altogether. His plan for devices was similar to what RIM ultimately released in 2013, with one keyboard and one all-touch device, though he also proposed a new 7-inch tablet, a slide-out keyboard for the all-touch model, and an E Ink strip for notifications. 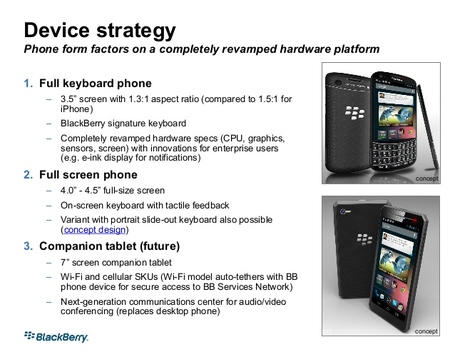 A year after his proposal, Chan thinks BlackBerry still has valuable resources, but it’s going to be a tougher sell."A lot of momentum has been lost," he says. In a note beside his slide deck, he writes that "the strategy of an enterprise grade Android company is still sound, but it just might be too late to save Blackberry as an independent company." Tom Moss, former head of business development for Android, is a little more optimistic. "Honestly, what you suggested might even still be possible today," he says on Chan's Facebook wall, if coupled with technology that would make apps themselves secure.

BlackBerry remains the platform of choice for many top businesses and government agencies, and Heins adopted some of the same strategies Chan had proposed, including a pared-down device portfolio and limited integration with Android and iOS in the form of a BBM app. Its userbase and cash reserves remain large, its debt nonexistent. But Chan says that even in 2012, a buyout wasn’t considered a safe bet. "It was considered an absolutely crazy idea, which was why it attracted incredibly talented people who wanted to do something ballsy," he says. "But in general, people thought it was too crazy."

While Chan was pitching his takeover proposal, Thorsten Heins was categorically denying that RIM was in trouble: in fact, he insisted that there was "nothing wrong with the company as it exists right now." But ongoing rumors suggested that RIM might spin off its hardware or enterprise divisions; all signs point to Chan being one of several people who considered picking up at least part of the company. It's only now, however, that BlackBerry has officially acknowledged the "strategic alternative" of selling itself off. As it does, it will have to weigh its old strengths against its reinvented image — and decide whether shooting for third place in the smartphone wars was worth the cost.