Larry Ellison didn't think much of Apple's prospects without Steve Jobs, but billionaire investor Carl Icahn disagrees. On Tuesday, one day after foreshadowing a major move, he revealed on Twitter that he had invested heavily in Apple. "We believe the company to be extremely undervalued," he tweeted. According to various reports, Icahn has amassed over $1 billion worth of Apple shares. That's not a tremendous amount — less than 1 percent of the company's current $444 billion market cap — but it may have a profound effect.

We currently have a large position in APPLE. We believe the company to be extremely undervalued. Spoke to Tim Cook today. More to come.

What might be more significant than the value of Icahn's stake is what his investment in the company signals. For starters, it could signal confidence in Apple's future.

Apple stock jumped 4.75 percent today after Icahn's tweet, adding an estimated $17.1 billion to the company's market value. Over the long term, he believes the stock price, currently a seven-month high of $490, will grow to be far greater. He told The Wall Street Journal that "we think it ought to be worth $625" even if the company's earnings stay the same, and told Reuters that it "should trade at $700 a share" if he can convince the company to buy back $150 billion worth of stock (making the remaining shares worth more money) and increase earnings by 10 percent.

For Apple, $700 is a magic number of sorts: the company's stock price peaked at $705 after the iPhone 5 announcement last September, before sinking back to earth again. With the company reportedly due to announce a new iPhone and an 'exciting new product category," things could potentially swing upward either way. 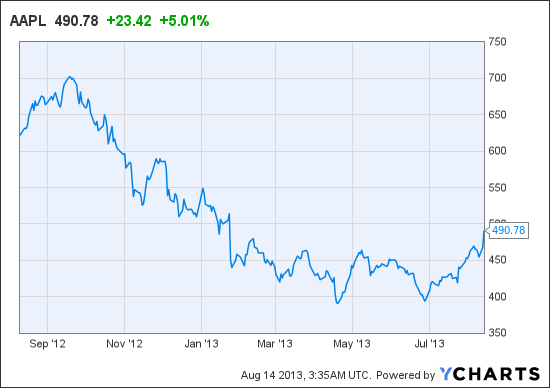 Apple announced a $60 billion stock buyback program earlier this year, and Icahn tweeted that he's chatting with Apple CEO Tim Cook about a larger one. Apple confirmed the conversation, but no more than that: "We appreciate the interest and investment of all our shareholders," said an Apple spokesman. "Tim had a very positive conversation with Mr. Icahn today." Cook's personal compensation is now partially based on the company's stock performance, so he'll probably continue listening.

The other thing an Icahn investment could signal, though, is a shakeup in Apple's status quo: Icahn didn't make a name for himself just by earning billions, but by disrupting companies whose struggles allowed him to buy lots of stock. Presently, Icahn is attempting to derail Dell's plan to go private in order to purchase the computer company himself, and forced Netflix to adopt a "poison pill" plan last year after purchasing a 10 percent stake and threatening a hostile takeover. For more insight into Icahn, we'd recommend this Forbes profile of the 77-year-old "activist investor."