Apple's beta iCloud website has been completely overhauled with a visual design that closely matches the company's forthcoming iOS 7 operating system. Today the beta portal, which is accessible to iOS and Mac app developers, was updated with new iconography and fonts that clearly take after the modern design language Jony Ive has introduced with the latest version of iOS set for release in the coming weeks. 9to5Mac has posted details and screenshots revealing the makeover which strips away the faux linen backgrounds and skeuomorphic design elements that were a central fixture of iOS before former VP Scott Forstall departed the company. 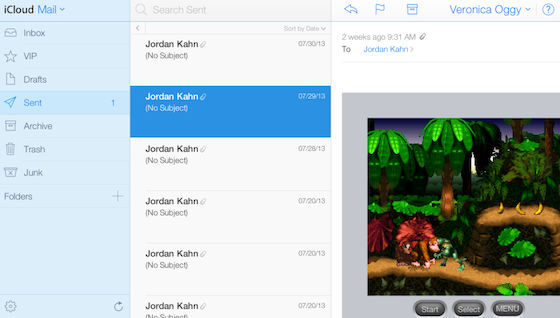 Now, the web app versions of Mail, Contacts, Calendar, Notes, and Reminders closely match their iOS 7 counterparts in both appearance and functionality. iCloud doesn't feature the flashy translucency effects that Apple has demonstrated in iOS 7, but the fonts and minimalistic design have carried over to the web. Find My iPhone has also been redesigned with a fresh look, though it still relies on Google Maps for location data over Apple's own solution. Presumably Apple is working to have the new iCloud ready alongside iOS 7 when the mobile OS is released to consumers. The company is expected to unveil new iPhone hardware on September 10th.