At long last, I've completed my iWatch Concept. This is something that's been beating around my brain for many months. It was bugging me that I didn't have anything visual to show for it, so I've been slowly and steadily chipping away at it; a few minutes here and a few minutes there. With most of my paying work wrapped up in NDA's and with very little time to work on just-for-kicks projects, this has been a lot of fun to mess with as time allowed.

I figured it'd be better to get this out there before Apple actually launches their real watch first. :)

My main focus here was to create a watch that... well... looks like a watch and not a rectangular screen bolted onto a watch band. Design, Hardware, and Software justification details can be viewed in the high resolution mockup that is attached. 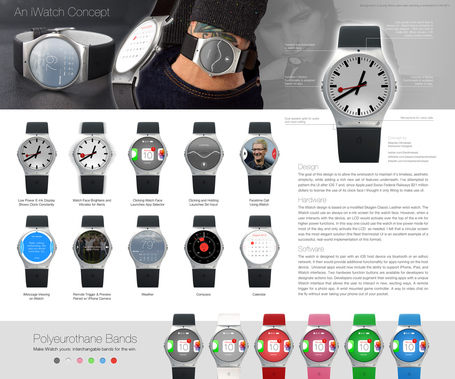 Let me know what you think. I'm particularly interested in getting feedback on some of the unique interaction mechanisms such as the 'tether' concept to a host iOS device, the hardware function buttons, and the use of Siri as a primary input method. I'm particularly fond of the thought of using a watch as a remote trigger for the camera on my iPhone- wouldn't that be fun?

This project was purely something for me to blow off some creative steam with. I'm sure whatever Apple comes out with will be phenomenal and I can't wait to test drive it in the end.

Original posting of this is here: http://dribbble.com/shots/1197072-My-iWatch-Concept-Overview?list=users