Share All sharing options for: China zoo faces uproar after 'African lion' revealed to be a dog

A zoo in China is facing an uproar of criticism this week, after it was revealed that its African lion is in fact a dog. The zoo, located in the People's Park of Luohe in the province of Henan, reportedly tried to disguise a Tibetan mastiff as a big cat, putting it on display in a cage marked "African lion", according to AFP. The Tibetan mastiff is a large, long-haired dog with a slightly lion-like mane, but the zoo's charade was exposed after visitors heard the animal bark.

According to the People's Daily, the zoo also tried to replace other exotic animals with even less congruous substitutes. The snake cage, for instance, contained two large rats and exactly zero snakes, while a leopard cage reportedly included fox-like creatures. 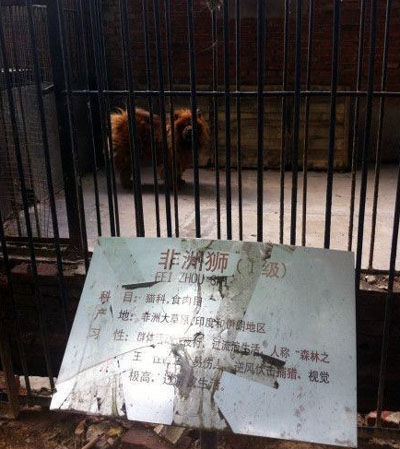 An "African lion" on display at a Chinese zoo. (Image credit: Sina Weibo)

A park administrator told Chinese media that the zoo actually does have a lion, but it had been temporarily moved to a separate breeding facility. The official also said that the dog was housed there for unspecified safety reasons, and vowed that the incorrect exhibit signs would be replaced.

But visitors who paid the zoo's $2.45 admission fee feel they've been duped. "The zoo is absolutely cheating us," one woman told the Beijing Youth Daily. "They are trying to disguise the dogs as lions."