Editorial for iPad is the new text editor to beat

Editorial for iPad is the new text editor to beat

I realize Iâm probably in the minority, but to me, the iPad is a lot more than a consumption device; itâs a real computer. Sure, it has all the benefits that usually get touted whenever tablets come up â light weight, small size, long battery life. But there's more to it. There's the clarity and focus you get from the single window, and the speed and ease of the touch interface. There are limitations, like the lack of sophisticated software you need to really be efficient when you're working at a computer. But developer Ole Zorn is showing the world just how powerful a tool the iPad can be for getting "real" work done with his Markdown editing opus, Editorial.

It makes automation simple enough that non-programmers can do it

This isn't a simple app, but thatâs not what it sets out to be. It is an incredibly nimble and customizable editor and previewer for writing in Markdown, a lightweight markup language that makes it easy to add the kinds of formatting you see on the web and in rich text documents (bold, italics, hyperlinks, etc). But even that sells it short. I would call Editorial a laboratory for carving up and reassembling text in the fastest, most flexible, most natural way possible. The comparisons to desktop text editors like Sublime Text are obvious, but Editorial succeeds where Sublime doesnât; it makes automation simple enough that non-programmers can do it.

Because the text you write in Editorial can easily be converted into HTML, itâs an ideal tool for writing on the web, but Markdown is readable enough that it's suitable for everyday tasks, too. Over the past couple of years, there has been an explosion in the popularity of Markdown editing apps for both OS X and iOS, but where Editorial stands apart is in its embrace of power, giving experienced users the tools to work with the speed and comfort youâd ordinarily find only in a desktop editor. 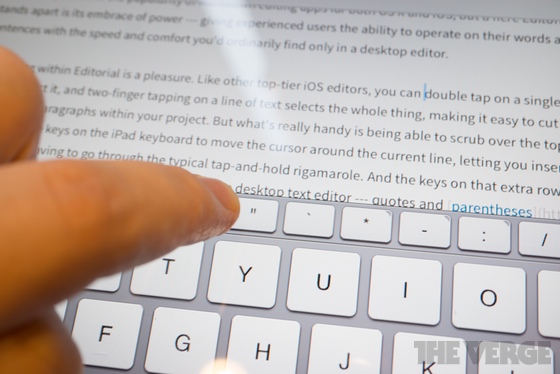 Navigating inside Editorial is quick and simple once you figure out where everything is. An immediate standout feature is being able to scrub over the row of convenience keys on top of the keyboard to slide the cursor along the current line, letting you insert text without having to go through Apple's tap-and-hold rigamarole. (The idea works so well, it makes me wonder why Apple hasnât implemented the feature itself.) The convenience keys behave how youâd expect, with quotes, parentheses, and asterisks wrapping the selected content. And just like implementations in iA Writer and others, the text in the editor gives you a live preview. Formatting characters like asterisks donât disappear, but theyâre rendered in faint grey, bold text appears bold, links are blue, etc.

The only thing holding you back is your imagination

The basic editing functions are great, but the really impressive part of Editorial is its support for scripting and automation. The developer, Ole Zorn, is the man behind the groundbreaking Pythonista for iOS, and the appâs fingerprints are visible everywhere. Under the hood of Editorial is a complete Python interpreter and more than a dozen libraries for operating on images, scripting the editor, making HTTP requests, and using the iPadâs clipboard. As long as you know a little bit of the language, the only thing holding you back is your imagination. But if you've never written a line of code (or even if you have), Editorial has another, more accessible way to create custom actions called Workflows. 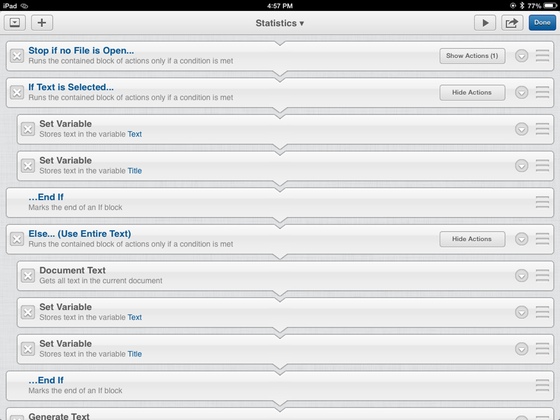 If youâve ever used OS X's Automator you know everything you need about Workflows. Tapping on the wrench in the top-right corner of the editor brings up a list of pre-fabbed actions for doing things like emailing the contents of your document (as nicely formatted HTML, if you prefer), producing a list of statistics including word and character counts, and searching Wikipedia. Tapping the "+" button pulls up a drag-and-drop interface for building your own actions out of configurable blocks. Exploring the built-in options is a great way to start building your own; for example, itâs trivial to tweak the Wikipedia workflow to search the domain of your choice, like theverge.com. And there are tons of other features I don't have the space to talk about in detail: a bookmarks bar for quickly getting at your favorite workflows, Dropbox support (including a great interface for diffing versions of a file), and TextExpander-style snippets.

It would be hard to imagine a better editor

So is Editorial right for you? Honestly, even though it works well as a basic editor for plain text, people looking for something simple to jot down ideas might be more at home with something like Byword. But if you want to turn your iPad into an efficient writing tool and have five minutes to learn the Markdown syntax, it would be hard to imagine a better editor, let alone recommend one that actually exists. The flexibility you get from the combination of workflows, Python scripting, and snippets is truly transformative, and as more applications begin to implement URL schemes for inter-app communication, the possibilities will continue to grow.

In the brief time Iâve spent with the app I feel like Iâve barely scratched the surface of what it can do. Editorial is the new king of iPad text editors, and at $4.99, easily one of the best values in the App Store.