In February 2011 a devastating earthquake in Christchurch, New Zealand took 185 lives, ravaged the downtown area, and destroyed the city's iconic, 132-year-old Gothic cathedral. Now, just over two and half years later, a new replacement cathedral has opened to the public at a cost of just NZD$5.3 million (roughly $4.3 million). What's the secret? It's a temporary structure, designed to last for just 50 years, and as such, much of the building is made of gigantic cardboard tubes. The design comes from Japanese architect Shigeru Ban, who's known for his inexpensive, paper-made structures made for disaster zones. The architect donated his time to the project, only requesting that his travel expenses be reimbursed, and after a few delays the final product is here: the "Cardboard Cathedral" opened its doors to the public last week.

The structure itself holds about 700 people, and is about as large as the nave of the old Anglican cathedral. There's also a massive, triangular window made up stained glass designs. The similarities end there, however. The building uses an A-frame roof, making it resemble old-school tent. Nearly 100 of massive cardboard tubes make up the roof, and they're covered with a huge layer of polycarbonate sheeting, protecting them from the elements and allowing light to pass through each of the beams. But the cardboard isn't structural. Ban originally intended to use the cardboard tubes to hold up the building, as in his other works, but engineering tests showed that they would sag in intense winds. As The Press' Charlie Gates notes, the cardboard merely covers timber beams that actually support the weight of the structure. And the shipping containers at the base of the structure are a facade for steel bracing that holds the building together. The structure is designed to stand up to earthquakes, though.

So the cardboard may be a bit of a "novel gimmick," as Gates writes, but the result remains impressive. He says the "remarkable new building is something for Christchurch to celebrate," calling it "clever yet accessible, soaring yet modest, and inspiring yet pragmatic." And the accomplishment of building it in such little time on such a tight budget is well worth praise — especially since the structure will serve as a meeting and concert space for a city without a large areas suitable for gatherings. 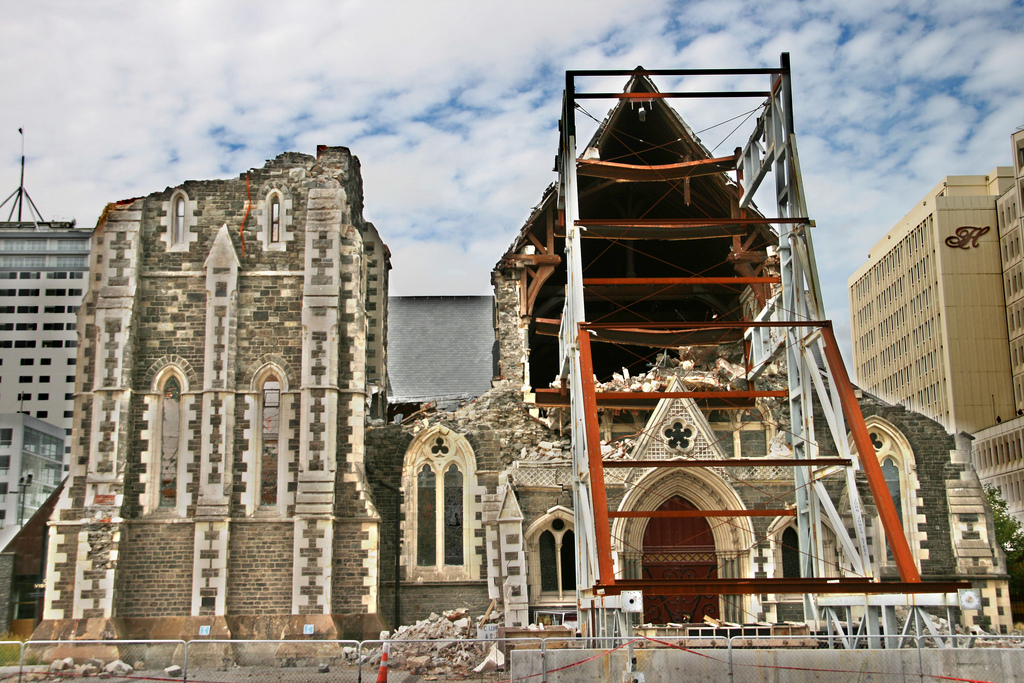 As for the old Gothic cathedral, which lost its distinctive tower during the earthquake, its future remains murky. Community members have fought plans to destroy the building to make way for a permanent structure, but most recently a court gave the go-ahead to proceed with demolition. City mayor said in response to the decision that "It's time to let it go, and to let the Church get on with creating something positive in the heart of our city." It's not clear what that will be — three plans were unveiled earlier this year — but for now, the city already has a new cathedral to call home.