Earlier today Google confirmed to The Verge that the company is blocking Microsoft's newly released Windows Phone YouTube app. Though both companies committed to work with each other on a YouTube app, Google wasn't happy when Microsoft released an updated app earlier this week. Microsoft now claims that Google is purposely attempting to block a YouTube Windows Phone app, and that the search giant's objections "are nothing other than excuses."

Struggles over an HTML5 app

In a blog post outlining what Microsoft deputy general counsel David Howard describes as "the limits of Google’s openness," the struggles between both companies are clear. Microsoft alleges that Google is blocking it from building a native version of YouTube for Windows Phone, an experience that Microsoft wants to be on par with the Android and iPhone equivalents. "Google asked us to transition our app to a new coding language – HTML5," says Howard. The Android and iOS equivalents are not based on HTML5, but both of those apps are officially supported and built by Google.

"The roadblocks Google has set up are impossible to overcome, and they know it."

It appears there are technical limitations in Windows Phone that are preventing Microsoft from building the YouTube HTML5 version. "It seems to us that Google’s reasons for blocking our app are manufactured so that we can’t give our users the same experience Android and iPhone users are getting," claims Howard. "The roadblocks Google has set up are impossible to overcome, and they know it." 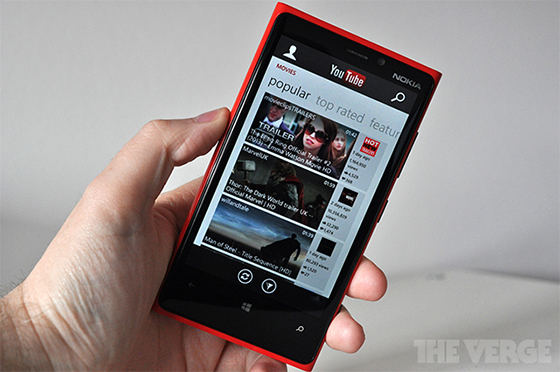 Is it all about the ads?

Microsoft's original app didn't include ads and the company built a download option in for offline YouTube videos. Google objected to both, and requested Microsoft remove the app from the Windows Phone Store. Instead, Microsoft updated the app to remove the download option, and then agreed the app would be removed to facilitate both companies working on a new version. The recently released app now includes ads support, but The Verge has learned the ads haven't been implemented in the way Google wants them displayed. "We’ve asked Google to provide whatever information iPhone and Android get so that we can mirror the way ads are served on these platforms more precisely," says Howard. "So far at least, Google has refused to give this information to us." Howard notes that Microsoft is confident it can fix the ad issues with Google's cooperation.

Howard also calls out Google over its concerns for branding and a degraded experience, noting that Microsoft previously shipped a simple YouTube app for Windows Phone that redirected users to the mobile version of the service. "If Google were truly concerned about a degraded experience, it would allow our users access to the new YouTube app they love," says Howard. The accusations and frustrations are hard to ignore, and it's clear there's a bitter war of control and ecosystems being played out behind closed doors. Howard finishes his note with a simple plea: "we once again request that Google stop blocking our YouTube app."

Read more: Inside the bitter YouTube battle between Microsoft and Google